A Week at Wimbledon

It’s week two at Wimbledon and I’m at home listening online to Roger Federer playing Marin Cilic in the Men’s quarterfinal match. I’m working on a photo of the majestic Swiss player, who happens to be fighting back in the third set. We’re trying something a little different with the AFP photo coverage this year. Normally, we’d staff the tournament with four photographers and two editors. However the last couple of months we’ve been stretched to the limits covering news and sport, particularly politics and the EU referendum. Also some staffers are covering the European football Championships in France. I chose to swap the second week at SW19 for Formula 1 racing at Silverstone. The talented Mr. Leon Neal taking my spot beside the net. Last year I covered the whole two weeks of the most famous grass court tournament, 13 days of seeing tennis balls going right to left and left to right. All before driving to Scotland for a week of walking at St. Andrews for The Open golf championship. Man, it nearly broke me! With the Olympic games looming in August we had to be conscious of not wrecking ourselves completely this summer. 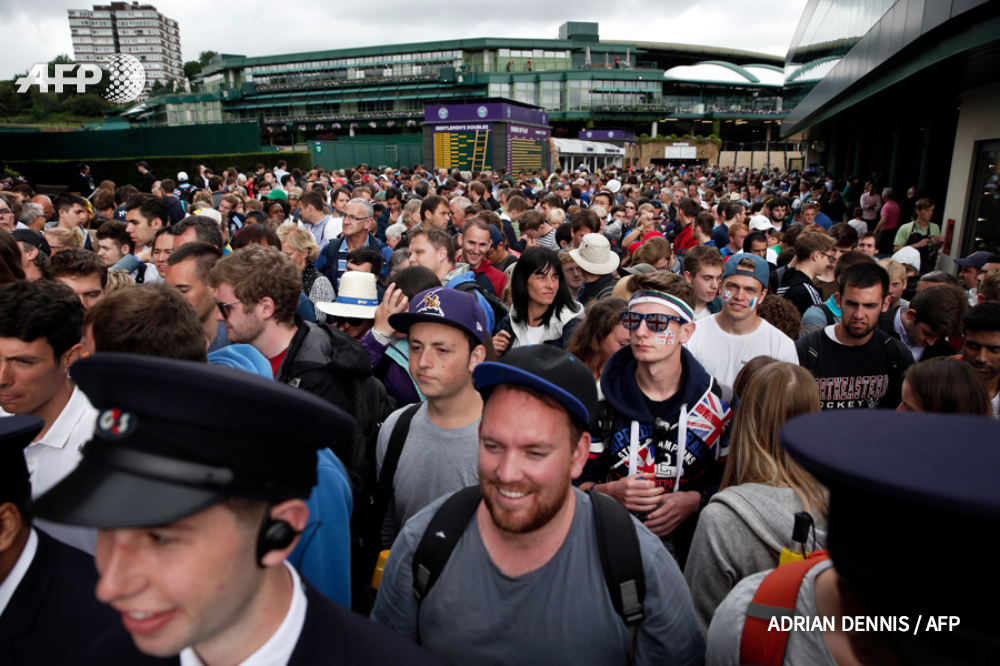 Knowing I only had a one-week of tennis, or 8 days including the warm-up day. I approached the tournament differently. I made a conscious decision to stay away from the show courts. 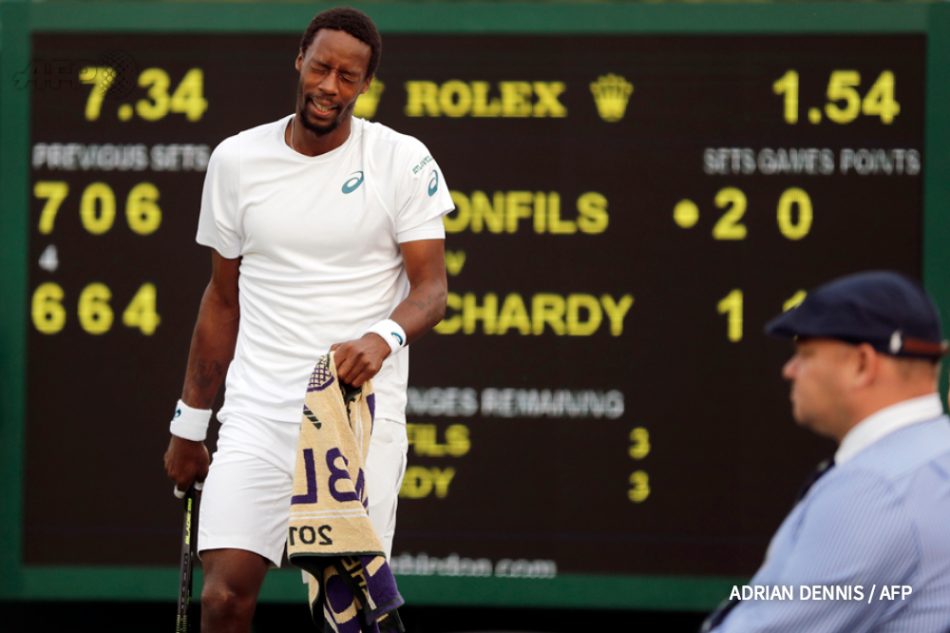 It’s a double-edge sword working on Centre Court. On the one hand you have the world’s best players. Images of Roger Federer, Novak Djokovic and Andy Murray along with the Williams sisters filling much of the newspapers’ back pages. On the other hand, you’re limited where you can sit and hence many of the pictures look the same. However I couldn’t avoid the main courts all the time. Eventually it was my turn and I covered 3 games in their entirety, which lasted a little short of 8 hours. And I forgot a cushion!

On Centre Court I sink into my seat, my head virtually at grass level, and sort out my equipment. I typically use 2 Canon EOS 1D-X camera bodies for tennis, although I’ve been kindly loaned a newer version the D-X MKII from my friends at Canon UK. And for the record, I like it! So two cameras and four lenses in my armoury for the day. I do most of my work on a 70-200mm and a 300mm lens which I hand hold for manoeuvrability. I keep a wide-angle zoom 24-70mm lens in my “snazzy” Wimbledon photo vest and keep a 400mm 2.8 and monopod between my feet. 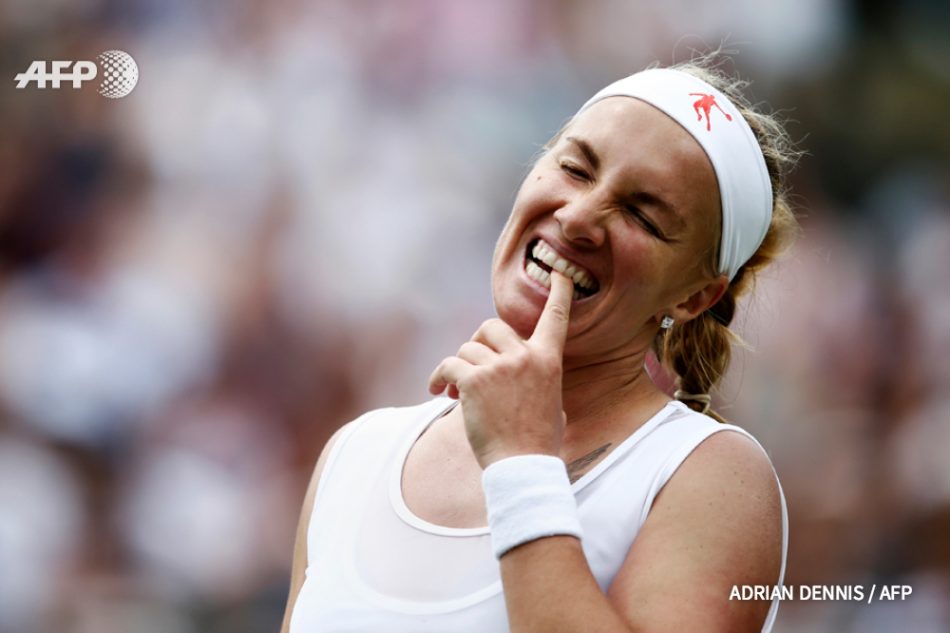 I wonder sometimes what the first rows of spectators think when a game begins. The player throws the ball to serve; camera shutters chatter a few frames. Each time the player hits a shot more clicks from the sideline seats. The sound of 20 or more cameras firing with every forehand and backhand shot – almost synchronised. It seems like we’re shooting a lot of pictures, but actually getting the ball on the strings of the racquet is actually quite tricky. Despite modern cameras shooting 12 frames per second it really is all about the photographers’ timing and the very first frame of the sequence. Glyn Kirk, AFP’s expert tennis photographer and veteran of 24 Wimbledon tournaments, refers to these as “the old fried egg” picture.

Once you get your timing right, you then have to factor in whether the photograph is “clean”. Hopefully there’s no object merging into the frame. The line judge’s legs or the edge of the seats provide an unwelcome distraction. On Centre or Court 1 there are a few sweet spots where a player occasionally moves to where the background is “clean” or dark. 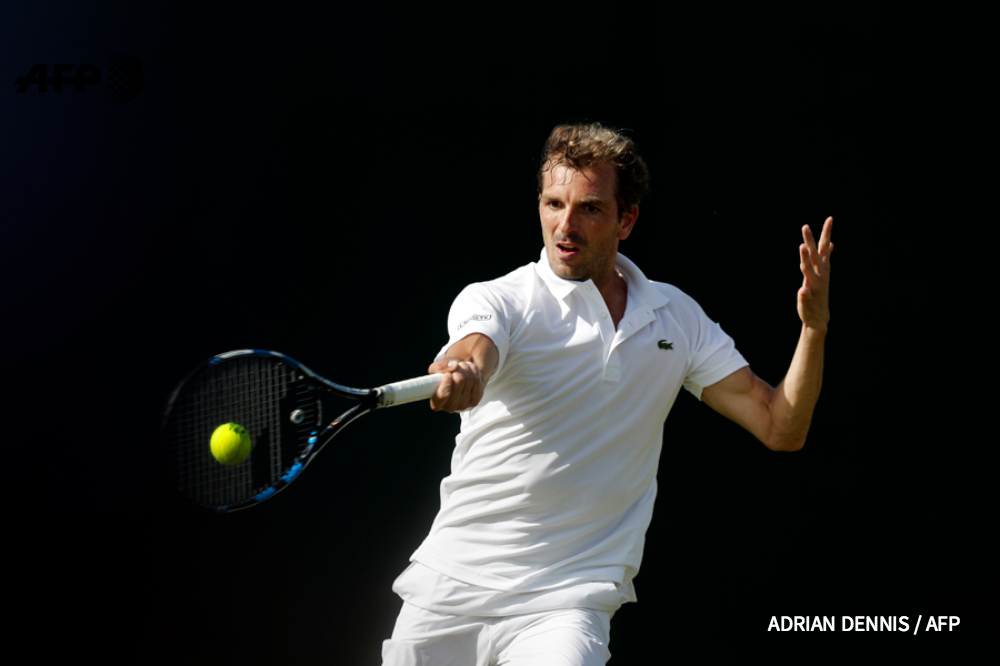 Now, if you’re lucky enough to be on court when the sun is shining in the early evening you can have some beautiful light to play with. Using different exposures coupled with those clean backgrounds, you can come up with lovely pictures. Photographers get excited when all these factors come together. 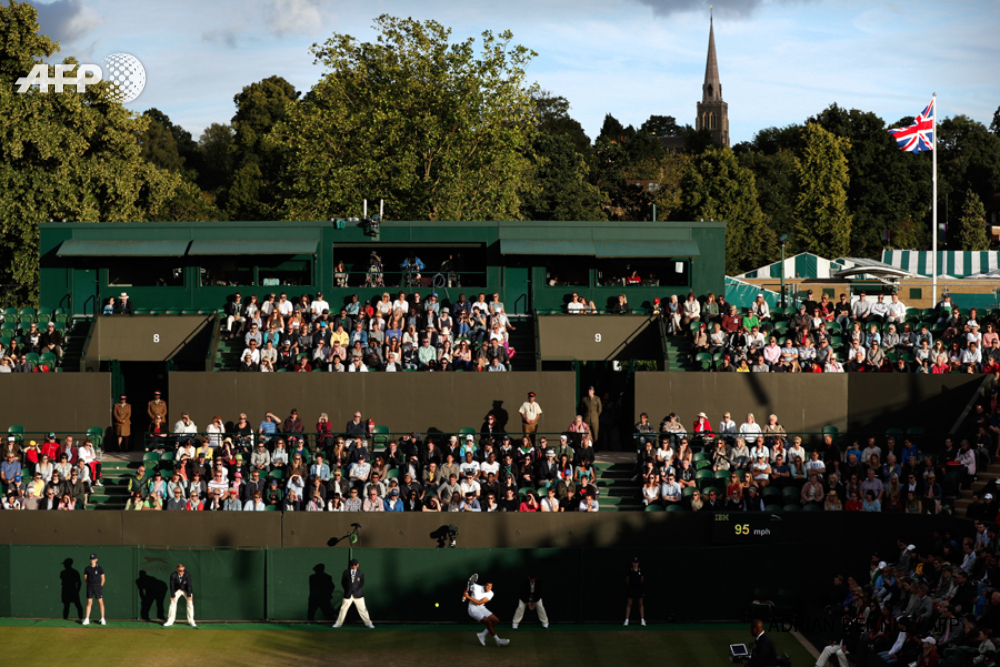 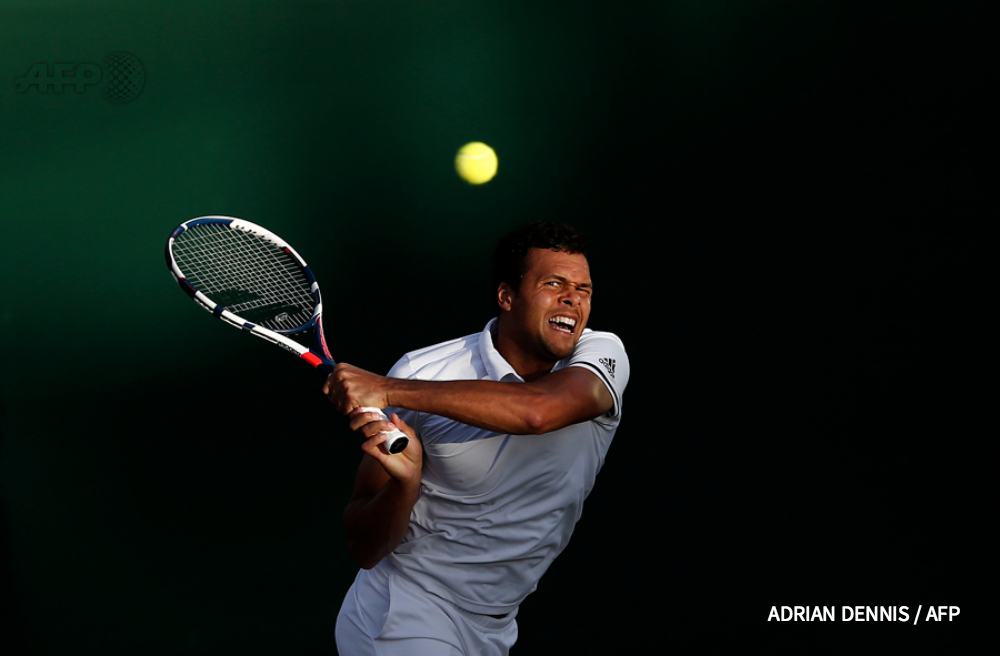 The opposite applies when it’s dull and cloudy or there’s play when the roof is covering Centre court. The light is flat and “boring”, and you’re working at high ISO’s. But we’re still there shooting.

During the first week the English weather didn’t disappoint. Rained stopped play nearly every day of the first week, keeping the court attendants on their toes. They manage to dismantle the court and cover the playing surface in a matter of minutes. This year the rain caused considerable disruption leading to play on the middle Sunday, only the fourth time in the tournament’s 130-year history. 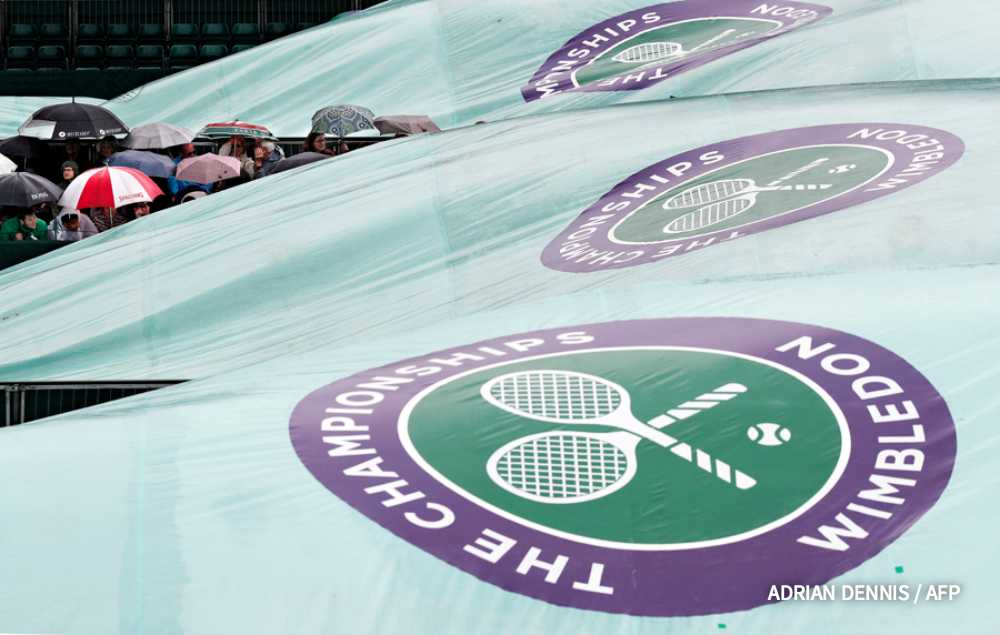 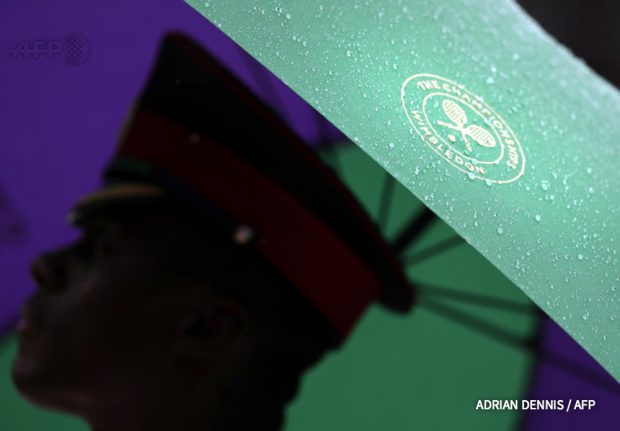 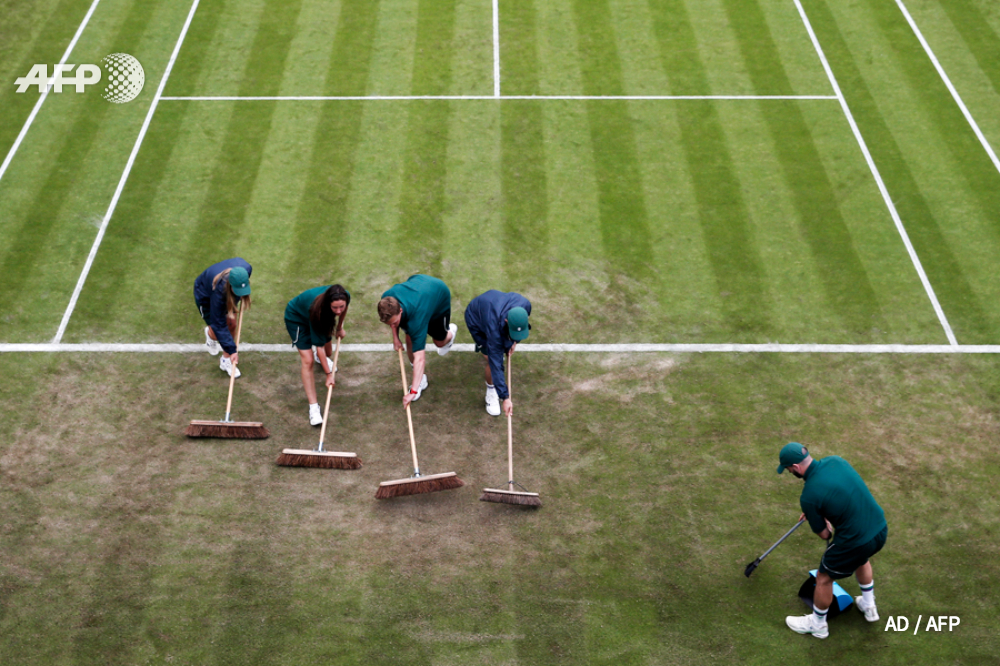 And the rain was arguably a factor in the demise of 2015 Champion Novak Djokovic, who lost his 3rd round match to American Sam Querrey. Perhaps one of the greatest shocks in Wimbledon history!

When we saw this story developing, Djokovic was two sets down overnight we decided to double up on our coverage. Glyn shot the game from the pit while I took a position in the “exit box” a small dark room at the corner of the court. This spot isn’t typically good for action but I was anticipating if the reigning champion was beaten then the different perspective might pay dividends. Several rain delays and hours later Sam Querrey won the match 7-6, 6-1, 3-6, 7-6 ending Djokovic’s chance of a calendar Grand Slam. Being one of only three photographers training our lenses on Novak as he walked off the court I had high hopes of seeing my pictures in the newspapers the next day. Unfortunately most of the media went with a picture of Querrey celebrating and some used a photo of Djoko walking across the court shot from high above. Hey ho, you can’t win them all! 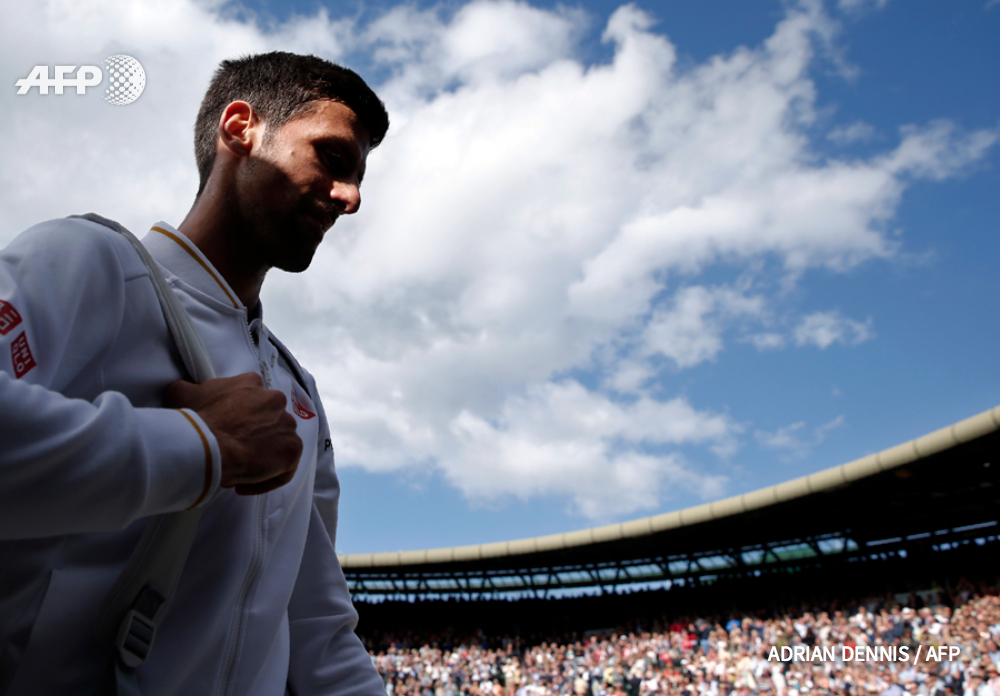 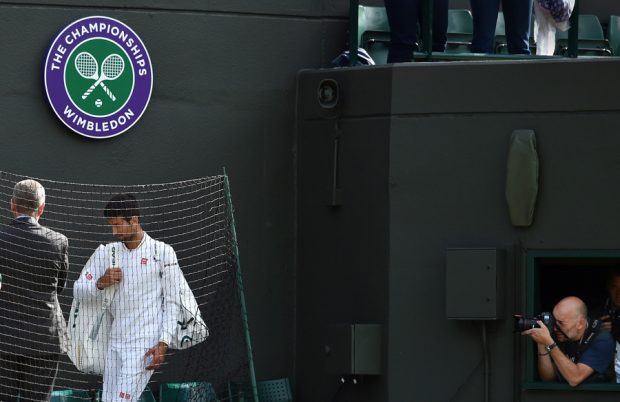 Anyway, back to me on my wooden bench trying to get comfortable. I employ a game repertoire, usually starting with my long lenses. Tight shots of players’ faces as they throw the ball to serve. Or simple “bat and ball” pictures hopefully with a fried egg or two! Once we get towards the end of a set, I “go loose” and shoot on a 70-200mm lens to include the player’s feet, hopefully to catch them if and when they dive or stretch for a crucial shot.

In between games I’ll review the pictures on the back of the camera, choosing and transmitting the pictures directly from the camera to an editor working in the media centre. Within a few minutes of making the photograph, the editor will have cropped and captioned the picture and validated [sent] it to our clients. Depending on who’s playing and how good the picture is, the editor has to decide whether to send it to a country or region, or all our clients worldwide. In a typical day we were sending around 300 pictures from the tournament.

At some point in my repertoire I’ll shoot a few wide-angle pictures with potential to crop into a letterbox shape. I feel it adds variety to our production. All the time trying to get the timing right when the ball hits the racquet. Then between games when I’m not editing and sending, I’ll glance over to the Royal Box and photograph the celebrities. 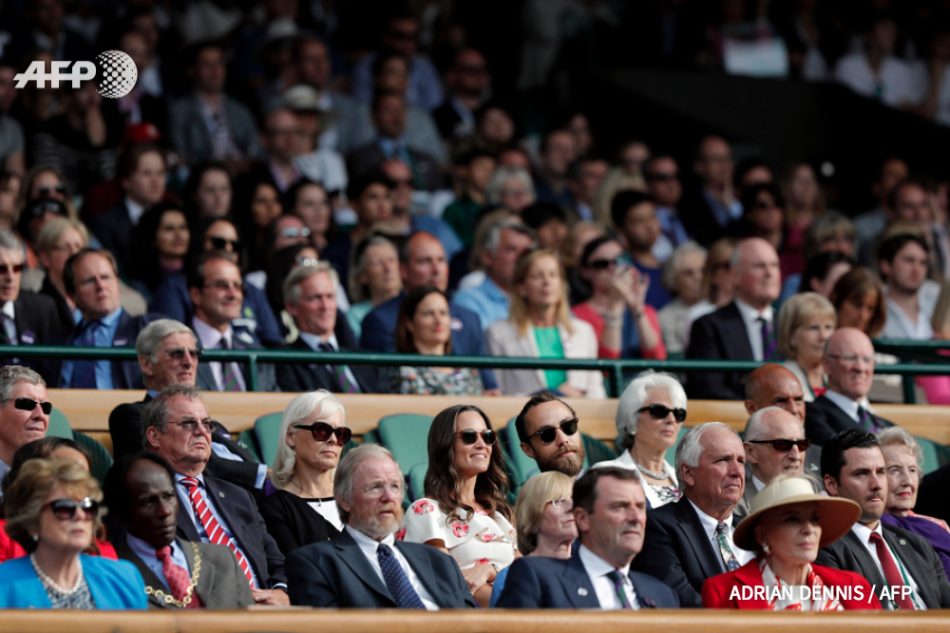 Once a game has finished and a victorious Serena has done her traditional twirl, I’ve barely enough time for a sandwich and a wee before the next game kicks/bats/serves off. Then my routine begins once again. As the hours pass, it can be difficult to stay focussed. Despite concentrating and looking through the camera viewfinder, photographers hold whispered conversations “How’s the new car?” “Can’t believe we voted out!” “I like your new trainers!” Similar to any colleagues standing around the water cooler its just Andy Murray is smashing a backhand a few yards away while the crowd is whooping and hollering.

If the game isn’t particularly exciting, which is often the case when you’re photographing tennis royalty Roger Federer, because he’s usually so clinical about the court. Very rarely does he react, in fact, it takes perseverance to get a frame of him hitting the ball with his eyes open! Often, I’ll try and find time to lark about with the shutter speeds. Exploring the unconventional and shooting tennis on a 1/15th second exposure and panning the lens from side to side as the Swiss genius moves about the court. Occasionally it works and makes a different picture. 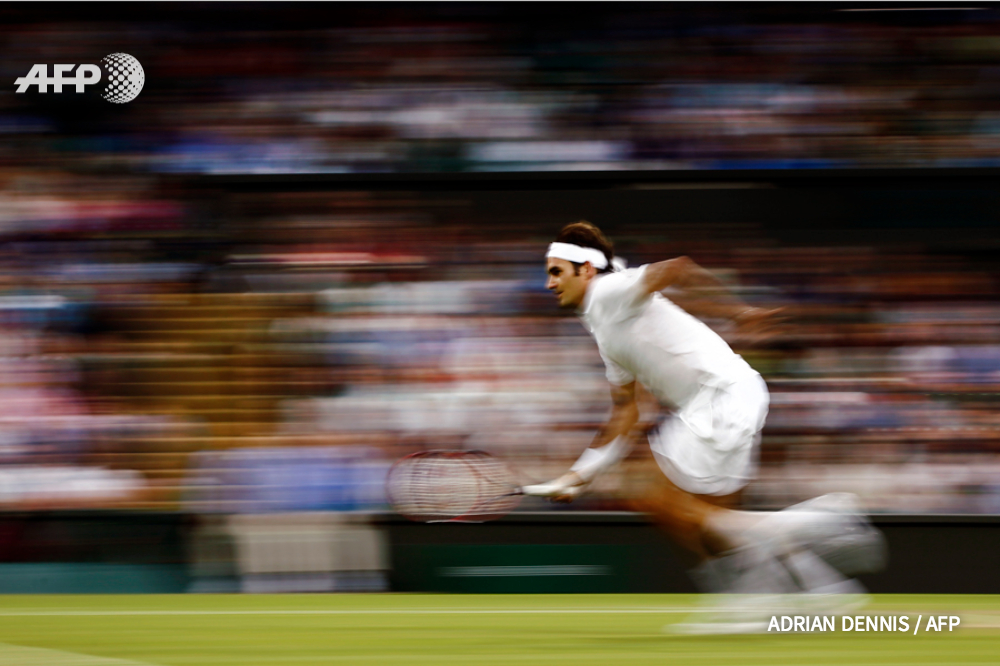 So, eight hours pass and my work is done. I peel myself off the bench; massage my derriere and head back to our underground office.

People are always asking, “How many pictures do you take?” This time, I noted how many I shot on a typical day. Including two hours on the outside courts in the morning and 3 games on centre court I shot 2170 frames of which the editors sent 124 pictures. Over the course of the opening week at Wimbledon I shot 8691 frames and the editors validated 686 pictures. Unthinkable in the days of using film!

Anyway, I digress. I was saying how much I enjoyed covering the outside courts and the lesser-known players. The problem is you have more ground and players to cover. Sometimes only stopping for a couple of games and a change of end. As soon as you have a decent frame of each player you move to another court. All the while trying to find angles and hence pictures I hadn’t seen and shot before in years gone by. All the more important these days while competing for space in the next days’ newspapers with up to 200 other photographers at the Championships during the first week. 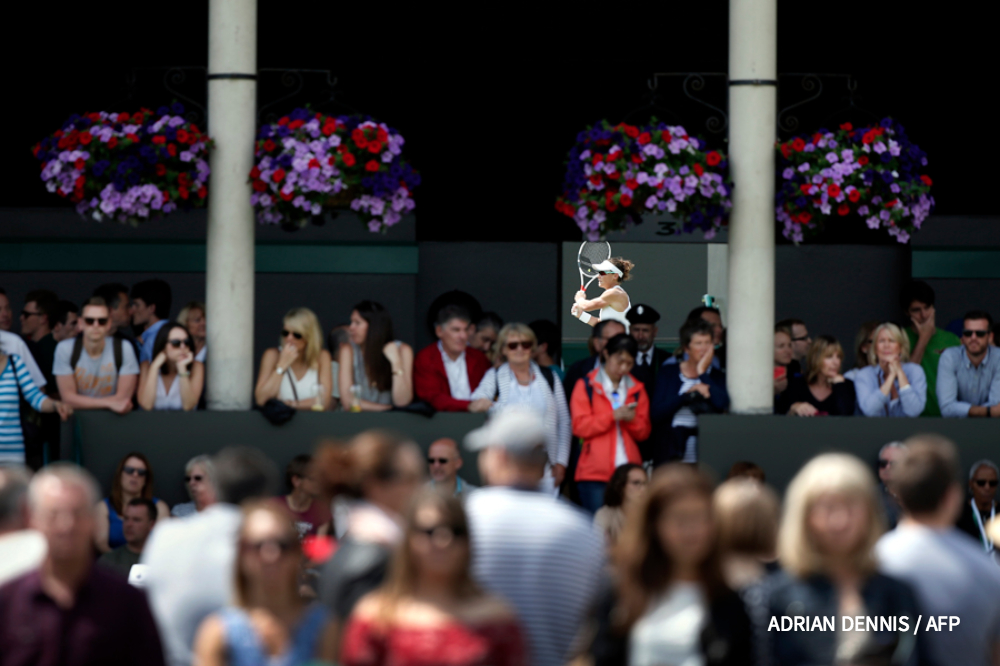 This year I occasionally needed to be in three different places at the same time. You’re hoping the game you’re covering ends quickly and the one you’re missing drags on. Knowledge of the tunnel network that runs beneath the courts help avoids the crowds ambling from one court to another. It’s pretty frustrating when you’re in a rush to get to a game while people dilly and dally along.

So, it’s been quite a pleasure taking my “normal” days off. Guess what, I’ve been listening intently on the radio and watching a bit of tennis and football on the telly. An unusual experience for sports photographers! On reflection I’ve been pleased with my work this past week. I’ve shot a few different pictures that I hadn’t regurgitated from previous years, written a blog and feel refreshed ready to go photograph broom broomy things at Silverstone.

In the meantime here’s a few more pictures I couldn’t fit in. 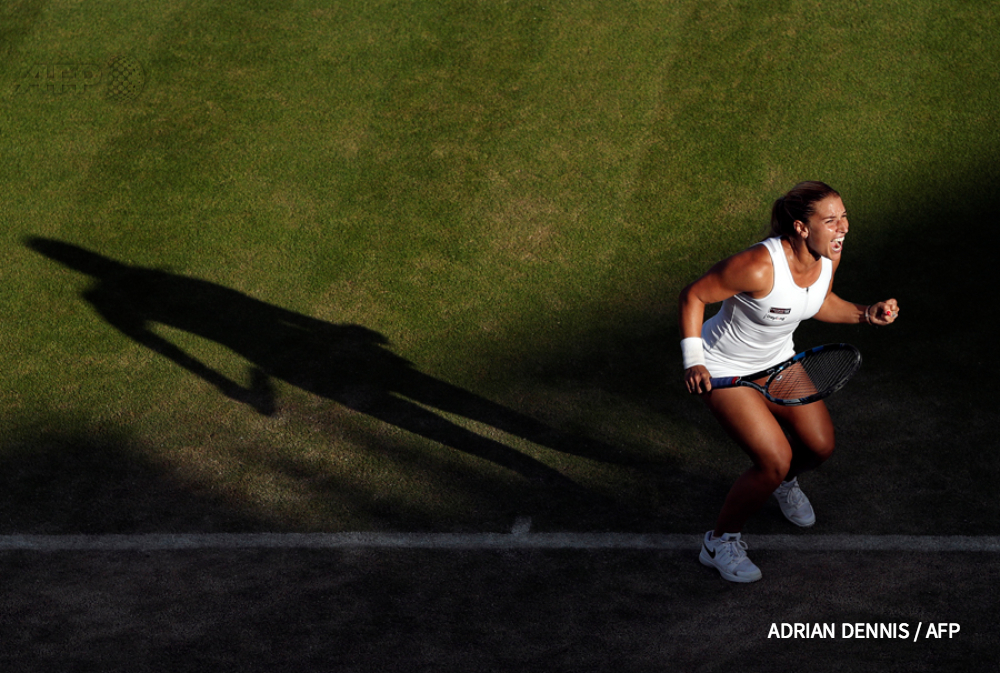 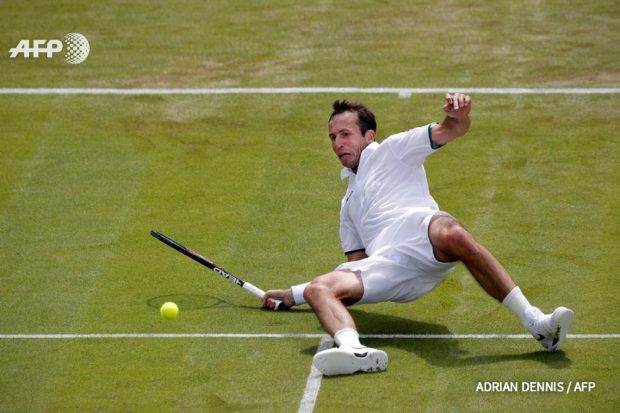 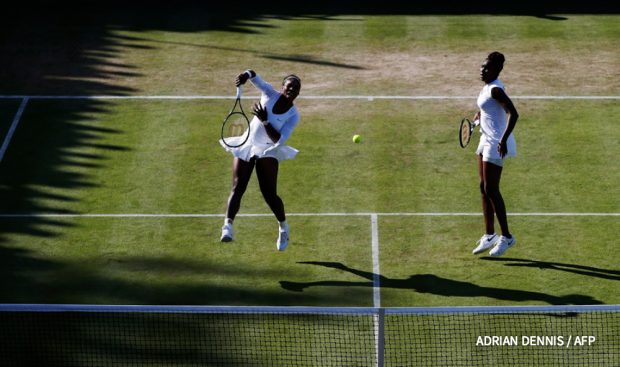 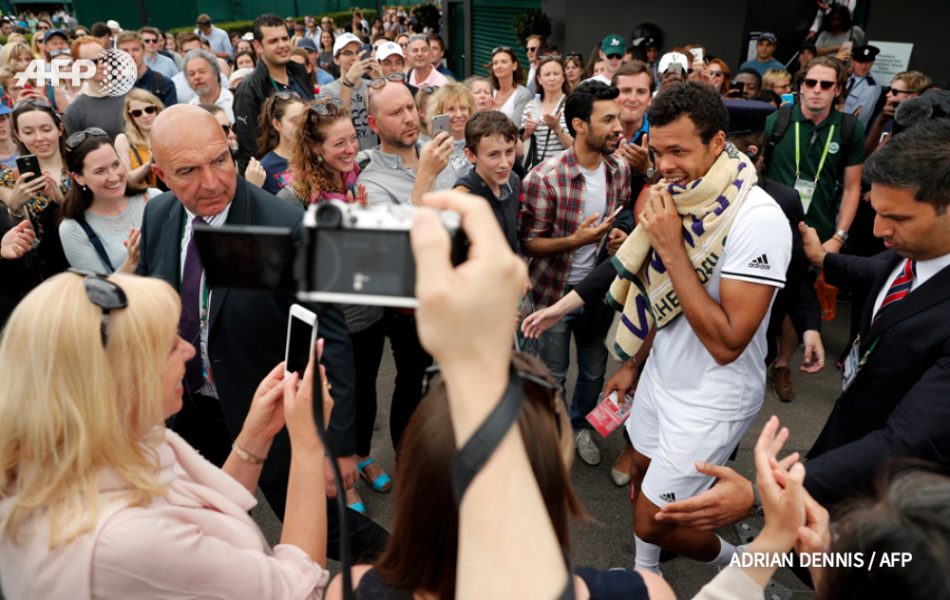 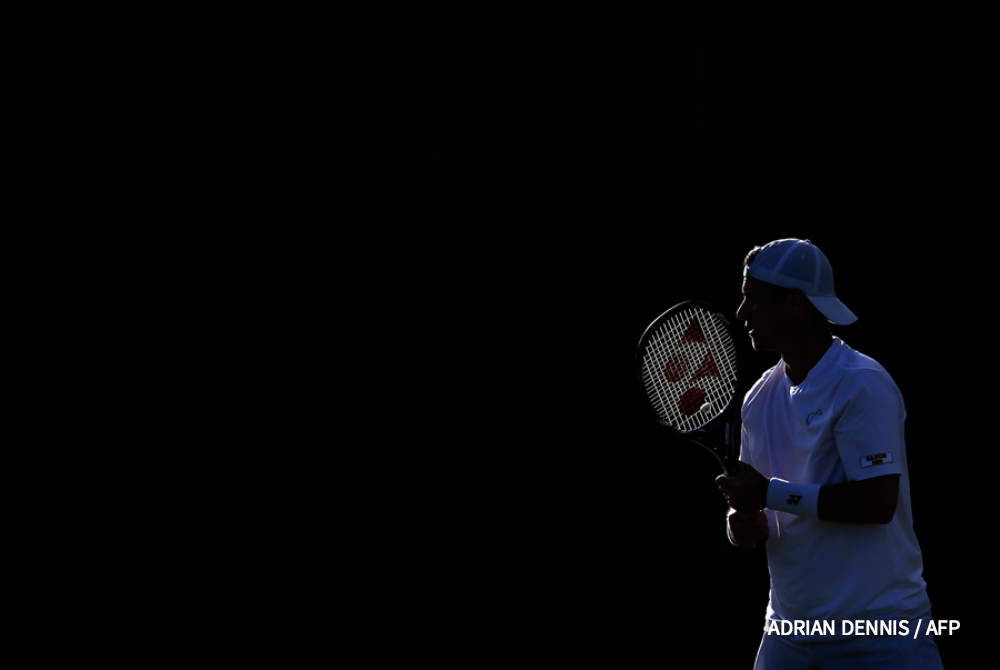