This Week So Far – How Frustrating!

In a departure from blogging about sporting events, I feel the need to get something on paper or screen about my experience working as a press photographer this week.

After enjoying the half-term holidays bumbling around the beaches in Pembrokeshire, Wales with my wife and kids, my first day back “in the office” was going to be OK. An early morning drive around the M25 motorway to the training complex of Arsenal football team to preview their upcoming Champions league match. It’s an easy assignment, apart from the 100-mile round trip. It consists of being chaperoned to the training pitches ahead of the players. Once Arsene Wenger and his team arrive on the pristine grass the clock is ticking. Fifteen minutes watching and shooting players stretching, doing keepy-uppies and several hundred frames later we’re ushered away just as the “proper” training begins. I used to get frustrated with the lack of opportunity to make a nice picture, now most of my middle-age colleagues and me look at it as an easy day. After an hour of editing while sipping a skinny latte mocha chino I’ve sent all there is to send. I managed 14 frames, but it didn’t help the pitch was completely backlit from our position and the field was shrouded in a mist. How frustrating! 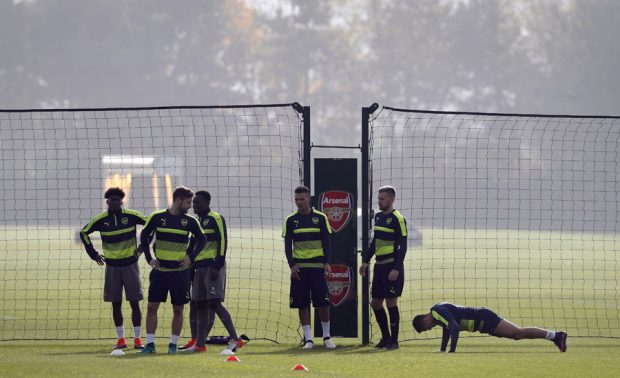 However, Tuesday (1st November) wasn’t going to be an early finish. I had been assigned to cover the state visit of the President of Colombia, Juan Manuel Santos. I got into London mid-morning “suited and booted” in preparation of a three-part assignment. The first part I correctly predicted wasn’t too exciting. I needed to take a position on The Mall to photograph the cars and carriages pass by containing The Queen and the Nobel Peace Prize winning President. I was there partly to cover the event, just in case the wheels come off or a protester steps into the road. But I was also there to justify my 8-hour shift. As you might already guess, nothing out of the ordinary happened and I didn’t make a very good picture of the procession as it passed. How frustrating!

The next part of my assignment and the reason for dusting off my threads, consisted of being the rota photographer (my pictures are shared amongst several picture agencies) in the Palace of Westminster – Houses of Parliament to photograph President Santos giving a speech to various distinguished guests including a former Prime Minister, Lords and Baronesses. I had several hours to kill before my report time, so I wandered through St. James’ Park feeling like I needed to find a picture even if it was just to prove to the picture editors I was actually doing something.

I found a “pretty” picture of the trees and their multi-coloured leaves. Using a long lens, while standing on a small mound I waited for a jogger to run up a path crossing through my landscape. Typically, there were a few people “getting a sweat on” elsewhere but not where I wanted them. Eventually, I settled for a couple of policemen walking their beat on the right path as I watched through my viewfinder. Once I shot that I couldn’t stand around anymore and I moved on to another position where I’d shot a similar frame a few years before. 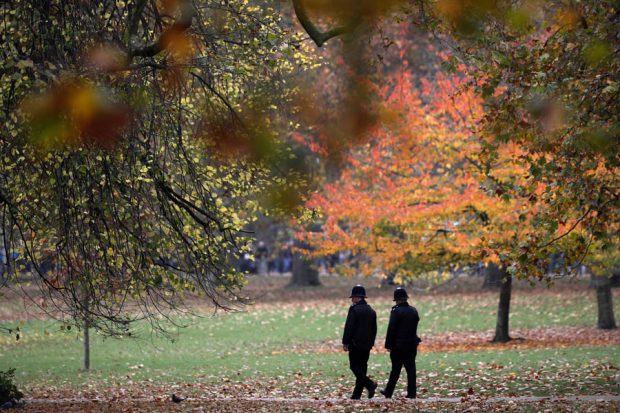 As expected, there were plenty of joggers where I needed them and I had a half-decent picture within a few minutes. While photographing various flouro-clad office workers doing their lunchtime exercise, I noticed a woman and small child playing and running through the trees. Crouched on one knee in the dirt (wearing my suit) I shot a sequence of pictures of them playing and enjoying themselves. I was pleased – it made a nice frame and one worth sending to those editors back at base sipping their builder’s tea. When the woman and her daughter drew level she noticed as I continued to photograph other runners. She approached me, and asked/ordered me to delete the pictures of her and kid. At this point I said I was happy not to use them if she felt offended. If she had taken a different approach, I would have been happy to send her a photo out of courtesy. How frustrating!

However, she didn’t leave it. She wanted me to delete all of my pictures while she watched. When I refused, she ran to get two passing police officers; two young constables asking what I was doing were now questioning me. However, I must say they were very reasonable although I still had to produce my press card and give them personal details that were noted as the woman looked on smugly. At this point, she had started to allude I was there to photograph children and I could potentially be a paedophile. I told her and the policemen I was there photographing the autumn colours in a public place. I hadn’t done anything wrong and I’m simply doing my job. But what has it come to when a photographer, whether they’re professional or an amateur, can be made to feel they have done something wrong or accused of being a sexual predator for simply taking a picture of a kid in a park. How frustrating! And now I was getting cross. 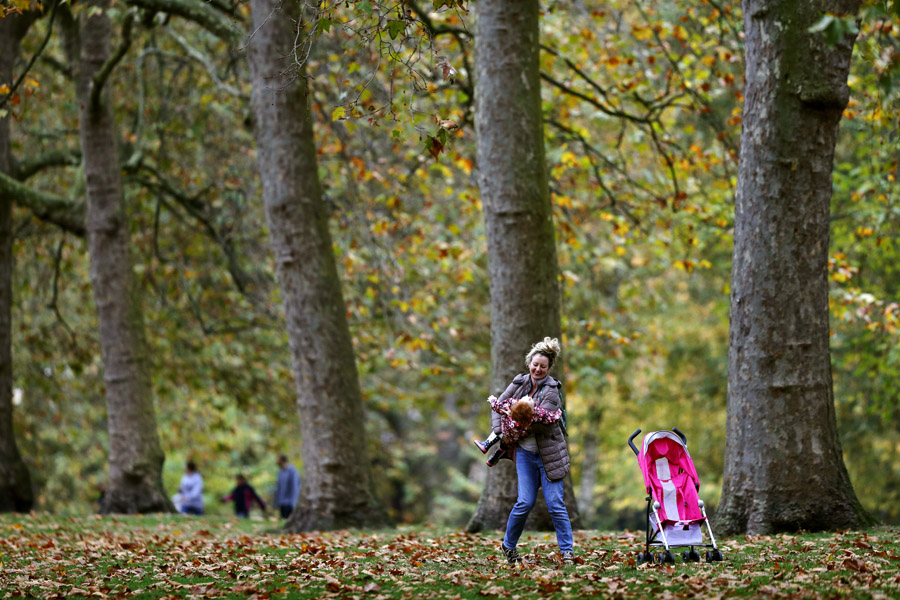 Despite the police officers telling the woman I was within my rights and they couldn’t force me to delete my photos, she started taking pictures of me with her phone demanding I give her my name – all this while leaving her daughter unattended 30-yards away. Eventually the police officers ran out of patience and told me to walk away while they listened to her complaints. I carried on ambling through the park and discovered a couple, this time adults, kissing while sitting under a canopy of leaves. I shot a few frames, still feeling uneasy that I was “spying” on people. Luckily for me, they never noticed me as I shot several different angles and compositions as they smooched. I actually quite liked the frame and I know how my French employers like a good kiss picture! 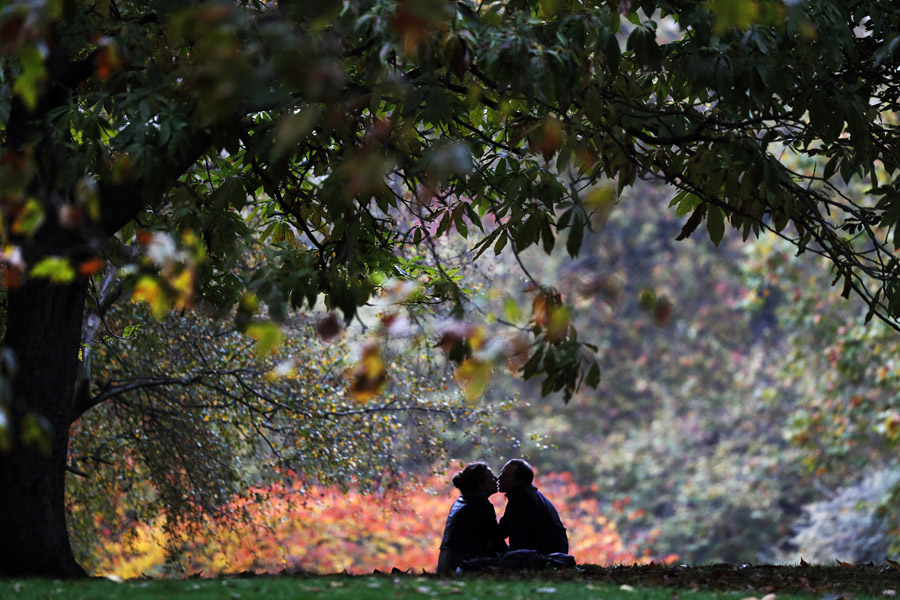 Off to another coffee shop to edit and sup yet another mocha-latte or whatever takes my fancy. The boom in London coffee shops has to be somehow related to press photographers in between jobs.While editing I thought, why should I delete the picture of the psychotic woman, so I sent a frame along with the snoggers to the editor who validated the picture to our clients worldwide. 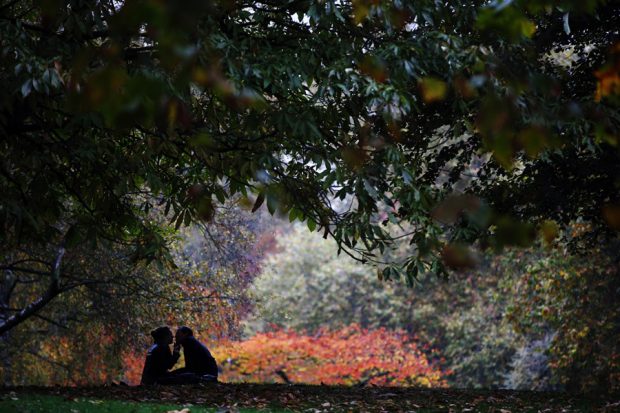 I then made my way back to the Houses of Parliament for my official duties. Ushered to the very dark and ornate Robing Room I listened to the eloquent Colombian President address his audience as I shot pictures on extremely high ISO’s quietly from the side. 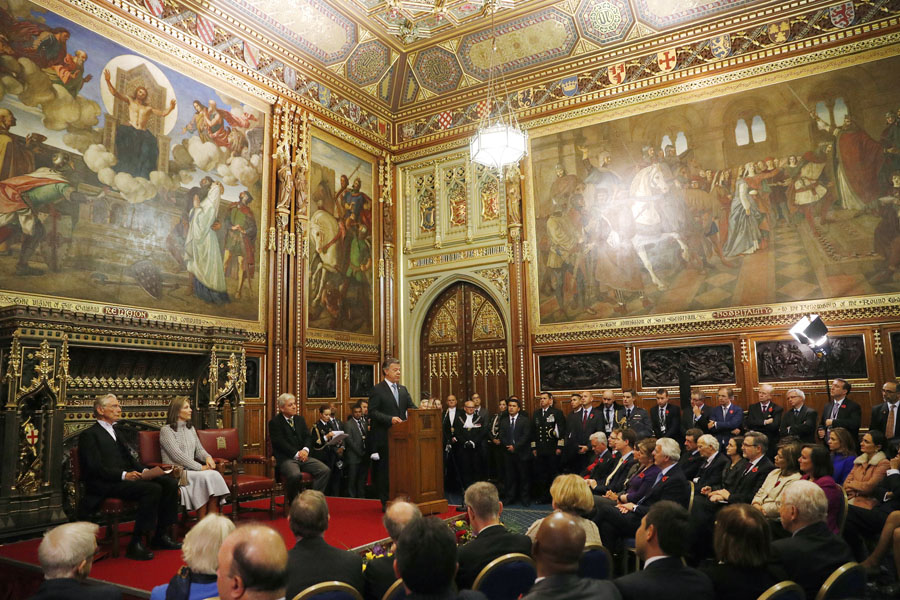 Now, twilight outside I couldn’t face another coffee and opted to pass the time in a noodle restaurant before making my way from one palace to another – Buckingham Palace being my third and final assignment. Once through security, greeted by a press officer, who immediately noted: I wasn’t wearing the “right” kind of shirt. I was led through corridors and stairways – behind the scenes, and entered front of house past the Yeoman of the Guard standing to attention with their pikes. Once in position in the music room alongside state banquet guests in all their finery the minutes ebbed past. Until the splendid mirrored doors opposite me opened and Her Majesty and the President entered the room and posed for me. A minute or two elapsed and I had 25 frames written to a CF card before I was politely told my “opportunity” was over. This time it wasn’t going to be a long edit while drinking coffee. I managed two suitable decent frames. Oh well, how frustrating! 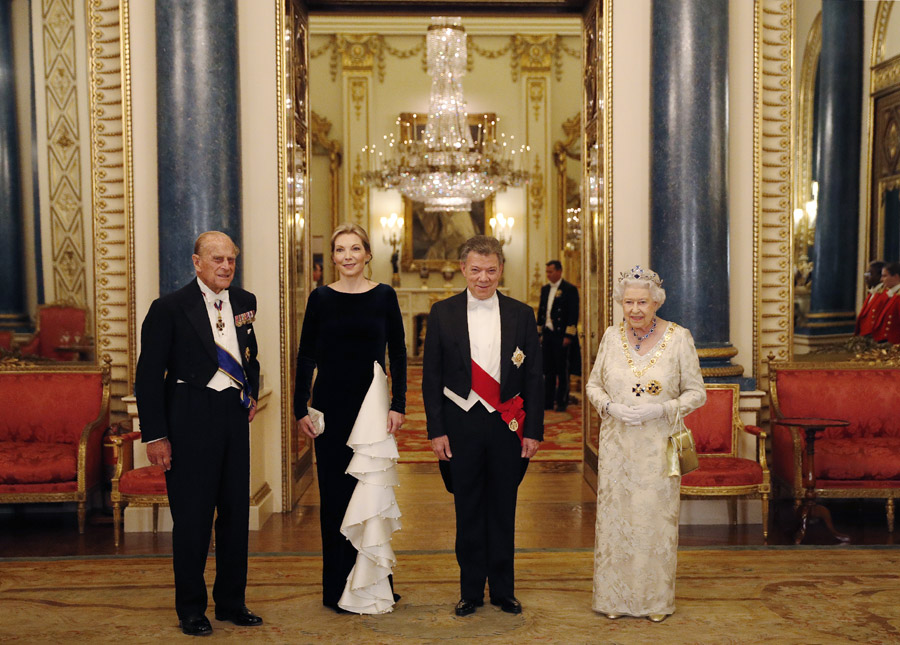