The Brawl in the Hall, Bethnal Green – London

I’d been keeping track of an email exchange from colleagues about amateur boxing – my interest was piqued. Following a long week perched on the sidelines of various rugby, football and tennis matches, I picked up the “Brawl in the Hall” assignment in Bethnal Green late on a Thursday night. It was potentially an interesting feature/sport story about white-collar boxers – City workers who trade their suit and tie for boxing gloves in the evening. After a month or so training, they get to fight an opponent for three two-minute rounds. It doesn’t sound like a long time, but just going a couple of rounds with a heavy punchbag can be exhausting never mind getting hit about the head to add to the confusion and fatigue.

I arrived early for an evening at York Hall, the fabled London venue whose creaking floorboards have hosted fight fans for more than 85 years. I was early enough to stash my belongings underneath the boxing ring itself. Now unpacked, each shoulder carried a Canon EOS-1D-X camera, with a 70-200mm lens, the other wearing a 24-70mm. I kept a 50mm f1.4 in a pouch just in case of extreme darkness. I made the decision I wasn’t going to use flash, mainly because I think it spoils the “atmosphere” and also because I wanted to move about unobtrusively. I prefer working this way – just trying to capture moments. I like seeing people as they are, not posing for a picture. 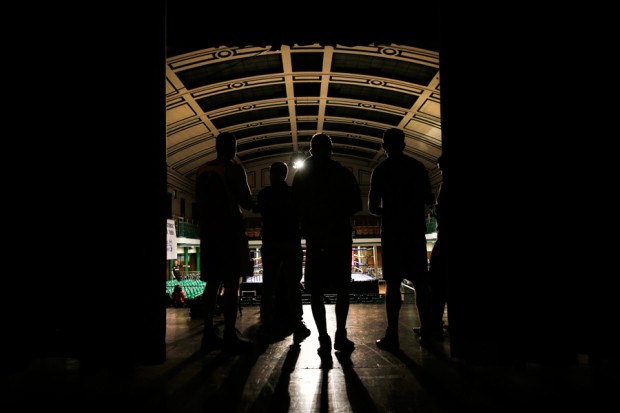 Most of my assignments involve shooting and editing either at the same time or immediately after the event. Tonight I didn’t need to worry. The story was going out on the “wire” the following week. Oh joy!

There wasn’t a great deal of light to work with as the fighters were lit by tungsten lighting directly overhead. The light fell off quite dramatically from the edge of the boxing ring, the spectators sitting in semi-darkness. But if you pointed your lens a certain way, the backgrounds went to black. Nice!

I considered changing the colour temperature settings but I knew I’d forget as I constantly moved between the fluorescent-lit dressing rooms and ringside. And hence I relied on the Auto White Balance.

I dialled in what I consider pretty high ISO speeds. I started at 2000 ASA but soon increased it to enable me to work at reasonable shutter speeds. Most of the time, sports photographers use their lenses wide open and tonight was no different. I think I’m a bit “old-school”, always trying to keep my ISOs as low as possible for better quality. But after editing and reviewing this job I won’t hesitate to take these Canon cameras to “infinity and beyond”.

Before the fighting started I used my time to talk to the venue manager to ensure I could move about freely. He kindly left the door unchained to the balcony giving me another option to shoot down on the ring. From here, I had a feeling of “déjà vu” as I observed from the balcony less than 20 feet from the ropes. 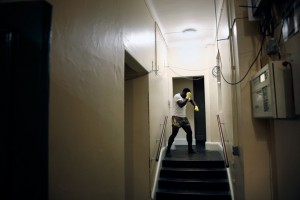 I’d shot a boxing match here before, alongside a fedora-wearing journalist friend, Julian Guyer. I later checked the archive – it was more than 12 years ago.

As time ticked on, ever closer to hearing the announcer elongate the names of the fighters, I spent a few minutes showing my face to the boxers in the dressing rooms – no objections here, they were oblivious to me wandering around. It became evident I had complete freedom to work. Quite unlike a normal day at the office where there are many rules where you can sit or go at sporting venues. 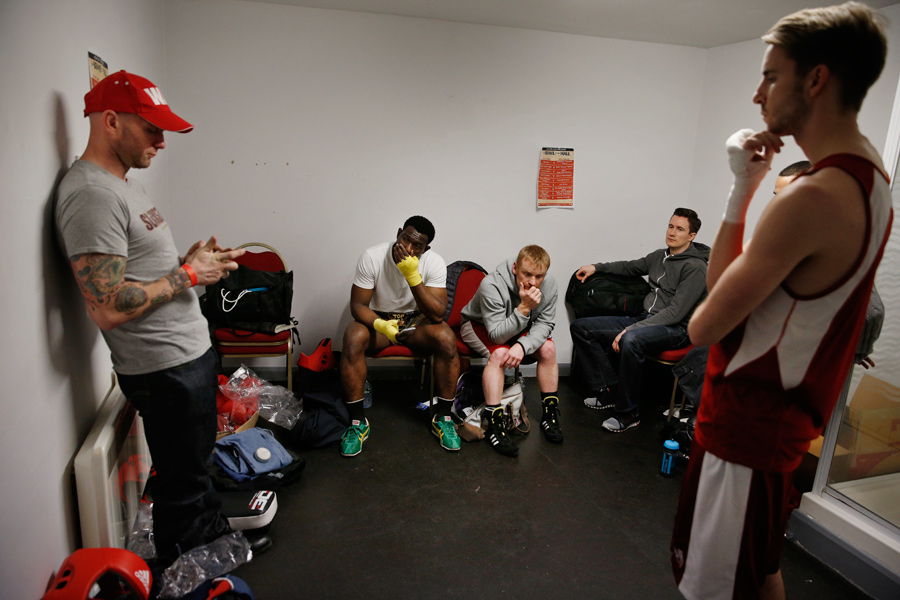 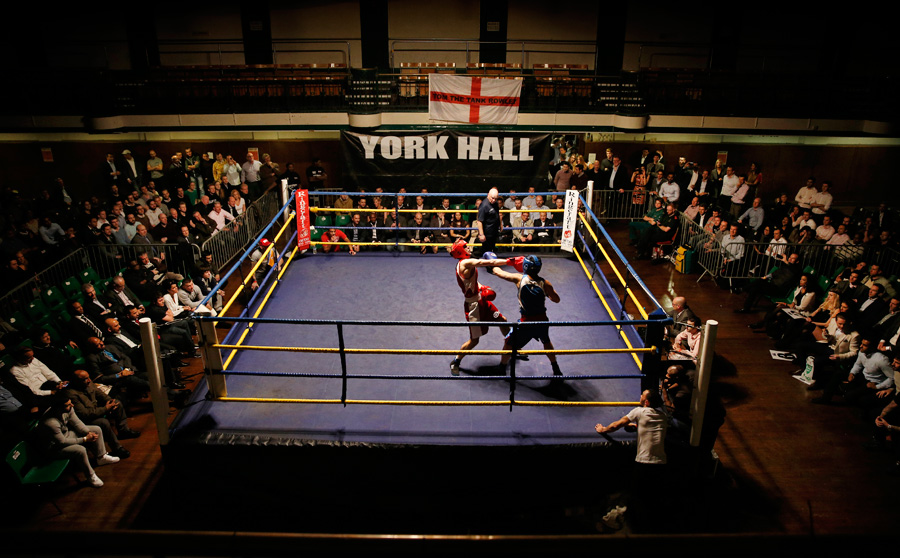 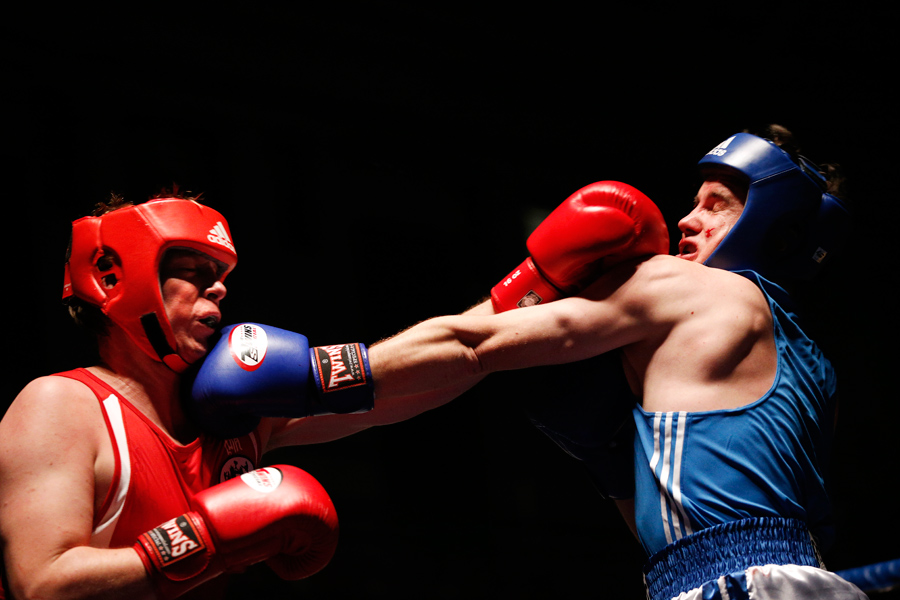 I’m not fussed about what level of sport I’m watching. I can get more hyped up and excited watching a youth football team I help train compared to watching a typical Premiership football match. Sometimes we’re all guilty of getting sucked into the hype. Watching grassroots sport can be really good and a hell of a lot cheaper.

Punters began to arrive and had time to down a few pints. I busied myself peeking around doors of tiny dressing rooms lurking in the shadows, watching the boxers warming up with their hands wrapped, and shadow boxing.

The bell rang, the announcer made his introductions. Nine matches on the card. The fighters, a solicitor, a banker and an IT consultant, were of differing shapes and sizes but mostly a bit soft around the middle. But as it turned out every one of them was brave and committed. 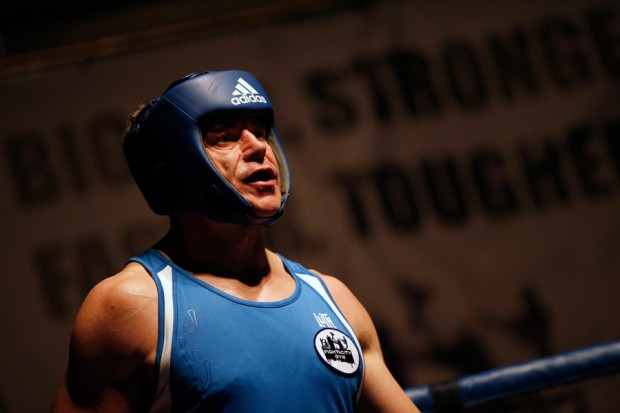 I needed a variety of pictures. I started at ringside for some tight action before moving upstairs for a different angle and general view. The crowd cheered their mates from the office. The atmosphere was buzzing! Moving about the crowd you have to keep your wits about you. It can be quite unpredictable when alcohol and fighting are in close proximity. Last time I was here all those years ago, the best fight I saw took place in the crowd. Which is why there’s plenty of big burly bouncers prowling the scene. But I was still careful not to knock into anyone. 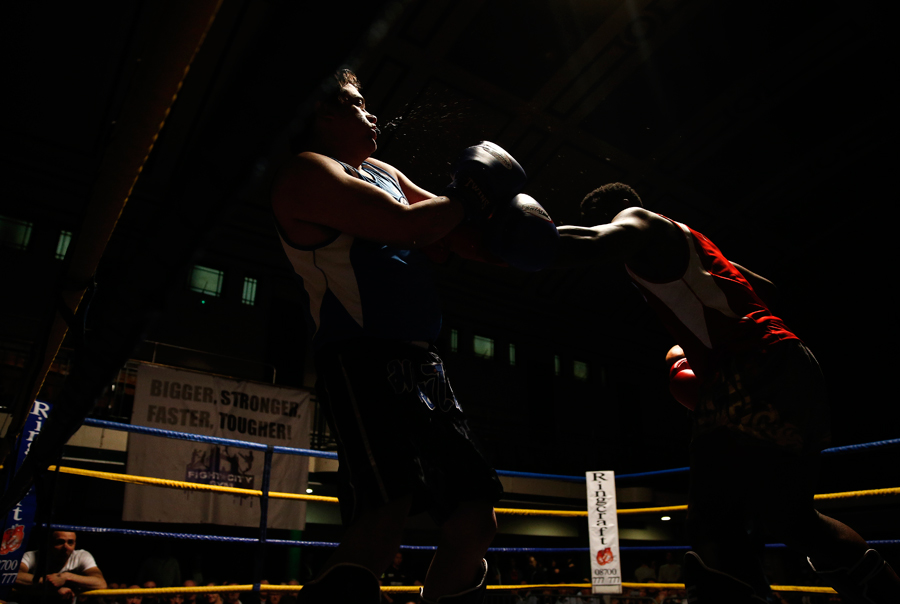 As the fights progressed a mental checklist was developing in my mind. I have the warm-up stuff, tight action and the wide angle. I trained my lens on the crowd for a few rounds. Men whistling and cheering their mates, women shielding their faces as their colleagues were getting knocked about the place. It’s a good feeling going to work and enjoying yourself. Especially when you’re making pictures you like. As I “worked” the crowd, the decibel levels rose just that bit more. I could tell a fight was lop-sided. I needed to concentrate back on the ring. A blue-corner boxer took a punch flush on the nose. He tried to continue, his face bloodied, but the referee sensibly called an end to the fight. I quickly moved back to the empty dressing room to await his arrival. He walked straight to the sink to inspect his reflection and look at his broken nose in the mirror. Just me and him. I shot a couple of frames despite wanting to “hammer” the motordrive. An amazing scene. You’d never been allowed to photograph that on the professional circuit. 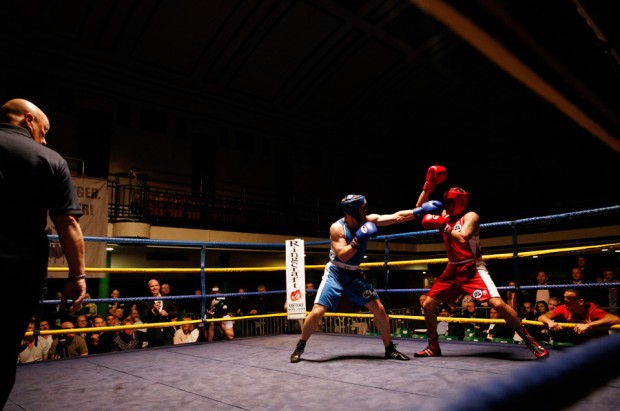 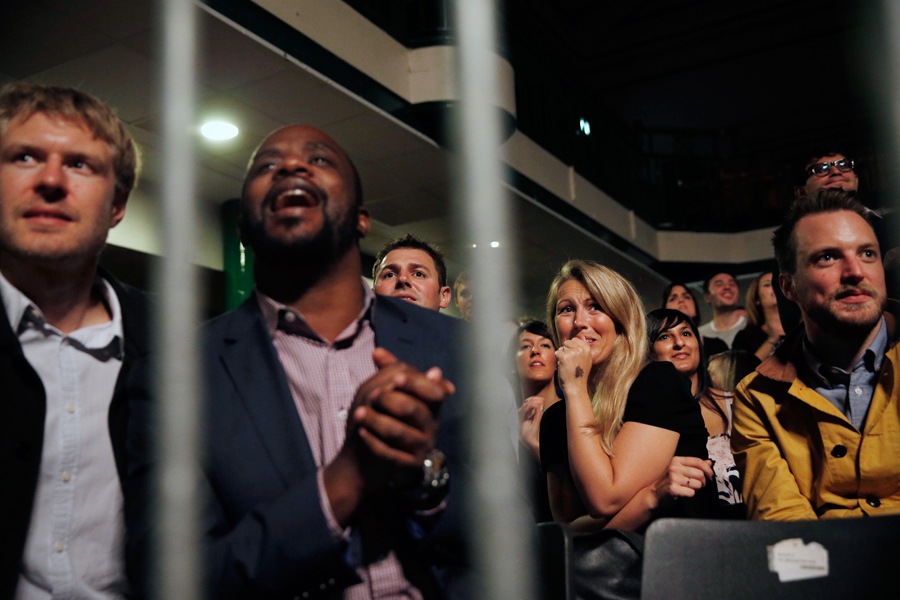 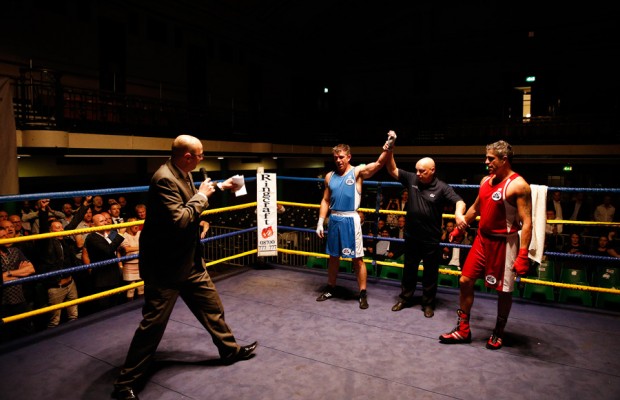 After nine fights I’d shot nearly 700 frames. It was past midnight when I made it home, the edit was going to be long, and would have to wait until tomorrow. Still, more features like these please! 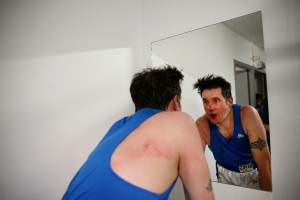 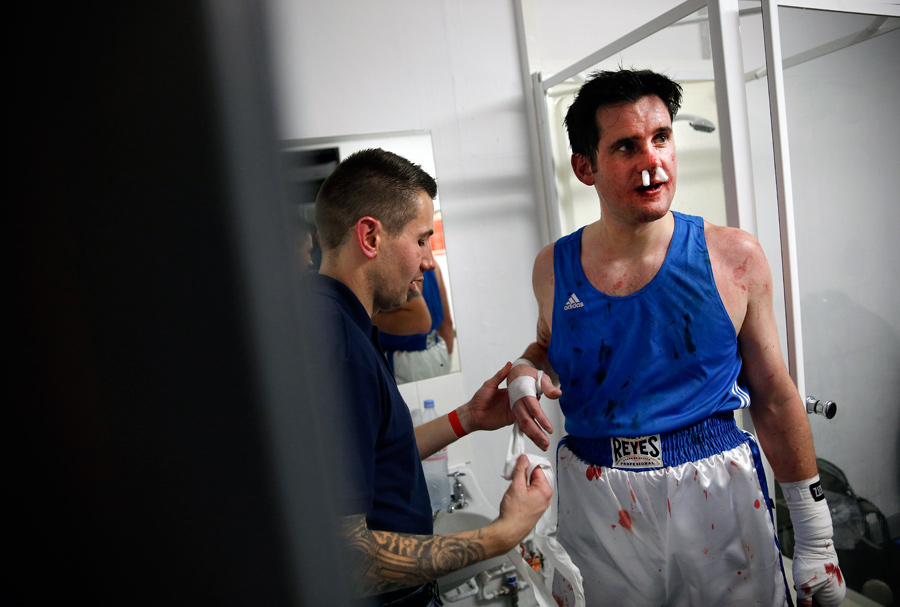