I squeezed through the hole in the middle of the road on Whitehall Place and descended. Near the bottom of the ladder 7-metres underground I struggled to get my boot through the “goo” and onto the last rung before stepping off backward into a waist-deep “porridge”. I thought to myself, “What am I doing…. this sewer is full of shit.” My harness unhooked, sewer technician Tim Henderson whispered, “Welcome to hell!”

Along with two AFP colleagues, video journalist Helen and the usually dapper Robin from text, we were invited by Thames Water to see for ourselves the consequences of pouring fat and cooking oil down the sink. And the problem gets worse at Christmas, an estimated two extra Olympic-sized swimming pools of turkey fat is flushed down the drains. 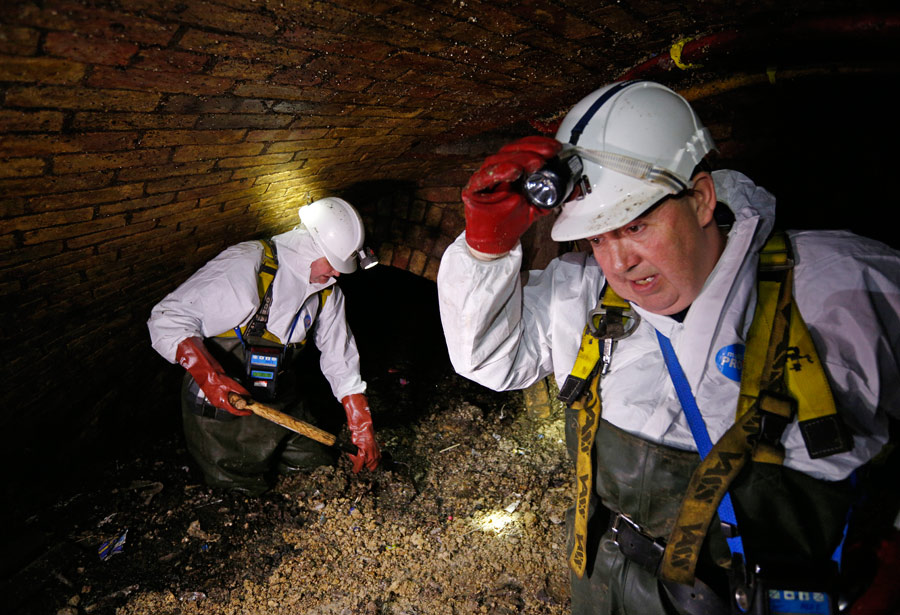 I had arrived early and met with born-and-bred Londoner Vince Minney, a sewer supervisor of 24 years for Thames Water. He removed a thick red rubber glove to accept my handshake. We stood around in the middle Whitehall Place, an upmarket part of London, a stone throw from Downing Street and Trafalgar Square. After exchanging niceties for a few minutes only yards from a 5-star hotel along with a top-hatted concierge looking on from his top step. Vince escorted us to his lorry where we spent 30 minutes changing into disposable overalls, thigh-length waders, harness and helmet. The standard issue rubber gloves, like Vinces’, were giving me a problem adjusting settings on my camera. Luckily one of the lads offered some latex gloves – like a surgeon would wear.

After a safety briefing, we were led back to the middle of a road and pointed to an open manhole cover. With taxis trundling by, I looked into a circular hole not more than 2ft wide and our entrance to the Regent sewer – the location of our interview. I must admit standing on ground level staring down the hole is a weird perspective, a strange sort of vertigo. Good job this assignment was pre-Christmas. I squeezed through the hole and onto the top rung, arms out resting on the tarmac. A few wiggles and I slipped into the darkness, cameras knocking against the metal rungs as I descended. All the time thinking, Helen isn’t going to like this! 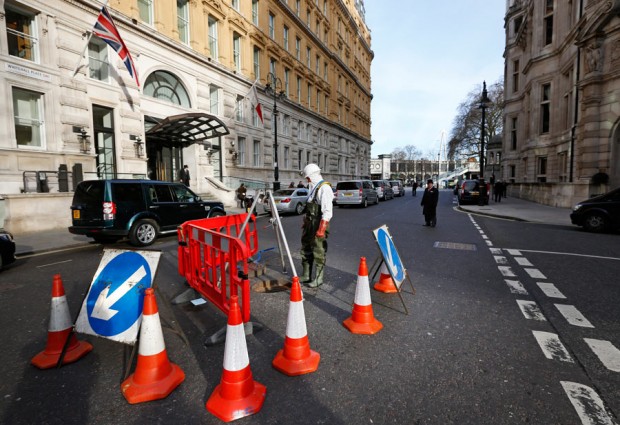 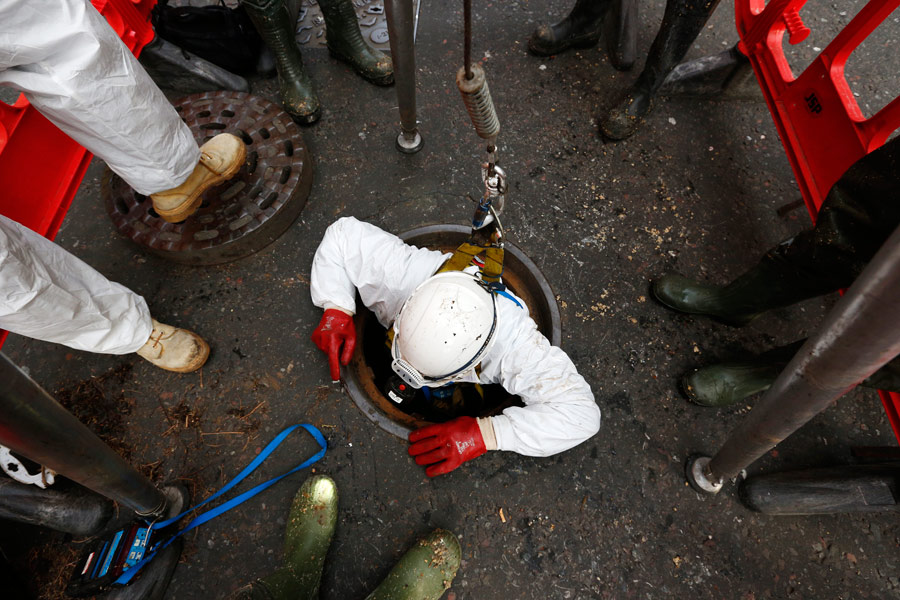 Within a few seconds my gloves had “stuff” all over them, which was transferred onto my cameras. It was hard not to brush against the walls on the way down. At this point I should divulge that unfortunately/fortunately I don’t have a sense of smell, the old hooter doesn’t work! A piece of information I mentioned several times that helped win this “plum” assignment. But joking apart, I’ve read a couple of books about London and have wanted to see for myself the underground rivers and sewers. But as I waded through the thick gloop it wasn’t quite how I’d imagined. There weren’t any walkways along the side, no handrails to hold. Nothing like they portray the sewers in James Bond movies where they’re chasing a baddie through a gleaming aluminium pipeline.

Once steady, I craned my neck to look back up from where I came and my helmet fell off and plopped into the….. for lack of a better word lava. Tim kindly sent it back up on the end of a rope for a clean and polish. 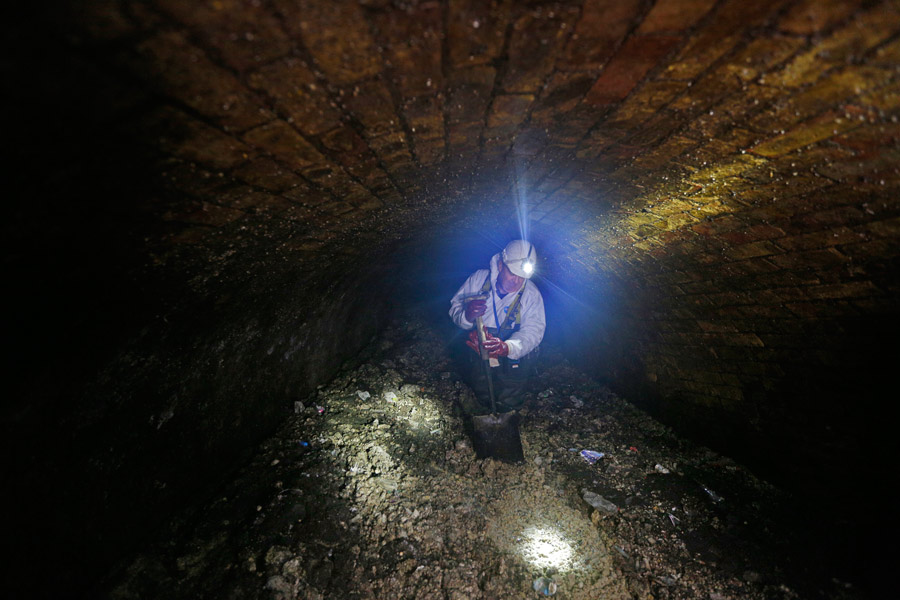 I turned to look at Vince leaning on his shovel, waist deep in the….. lava. He was relishing answering questions, telling me about the brickwork and the shape of the sewer pipes. For the record, the Regent sewer is egg-shaped. I tried to shoot a picture or two but my lens had steamed up. I used a piece of cloth to wipe the front element, it gave me a few seconds before the mist developed again as I looked through the viewfinder. Hmmm, this is going to be a problem. I kept wiping and shooting, careful not to drop my cloth. Each time tucking it into the top of my wader. Not paying much attention to the air I was breathing. After a while I gave up and stopped to take in my surroundings. As a photographer I’m sometimes so distracted taking the pictures I’m not 100% aware of what I’m actually doing. In this instance – a good thing. Years ago I found myself photographing rock climbers, and I had scrambled up to a ledge to photograph them as they came past. After making a few nice pictures I realized how high I was and couldn’t get down. Fail! 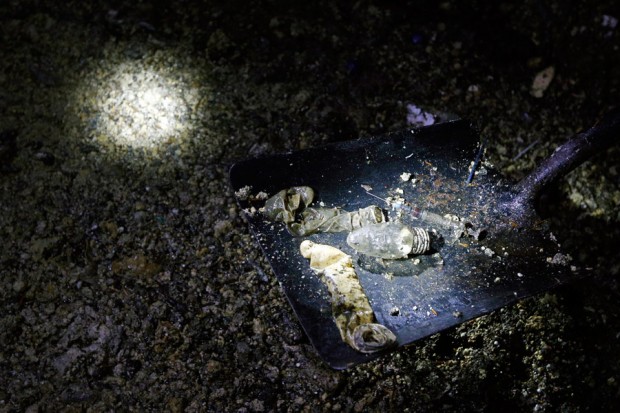 I put my camera down, I say down – it was hanging from my neck. You wouldn’t want to put anything down in here. The walls were strewn with what looked like toilet paper but was actually decomposing wet wipes. One of the major offenders that cause blockages. Like prayer flags in the Himalayas, they hung from anything they caught hold of. I gave up with the pictures for a while, waiting for my cameras to acclimatise to the warm, sticky atmosphere. I looked around to see fungi growing on the top of the waist-deep excrement. Worms slithering on the surface too. Upon closer inspection, tampon applicators, sweet wrappers, drinks cartons, plastic bags, pens and sanitary towels.Later, Tim collected more unsavoury items on his spade, a hypodermic needle, a light bulb and some condoms. He said, you really have to watch out for the condoms – especially the “fully loaded” ones. They can go off in your face. I couldn’t help but grimace at the thought and instinctively covered my face. But I did have to smile to myself when Vince, who was good for a quote or two said, “getting splashed with anything in the sewers is no fun, it never gets to taste any better!” Helen, asking questions while filming paused awkwardly. She admitted later she had a little bit of sick in her mouth. 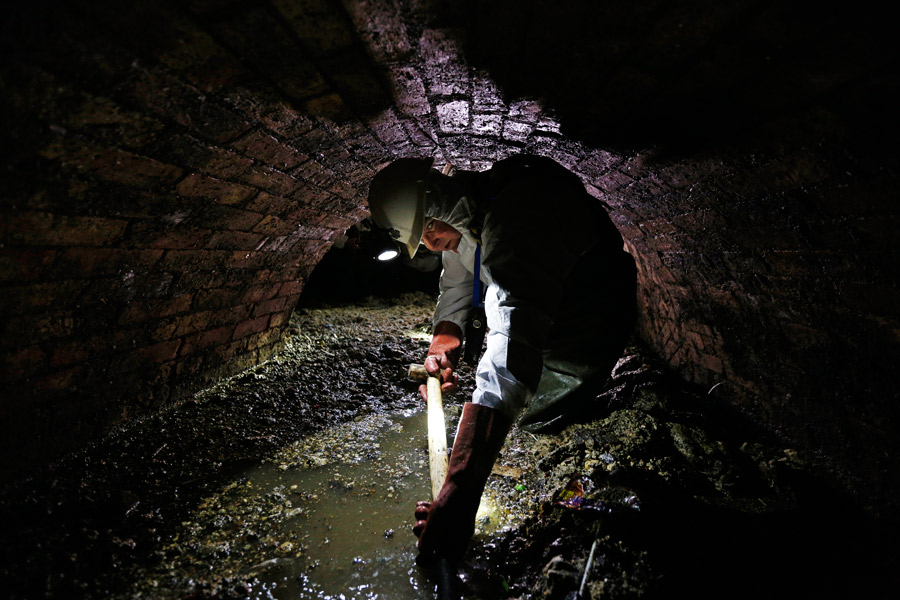 After half-an-hour the cameras and journalists acclimatised, a monitor intermittently beeping checked oxygen and gas levels. The sound of water being pumped into the sewer further up the line or a tube train passing underground close by made up the ambient noise. The hum of the traffic from above. Tim waded his way into a smaller tunnel to return seconds later with a typical “fatberg”. He holds the heavy rugby ball sized clump at his waist. Condoms and wet wipes enveloped by the fatty substance. 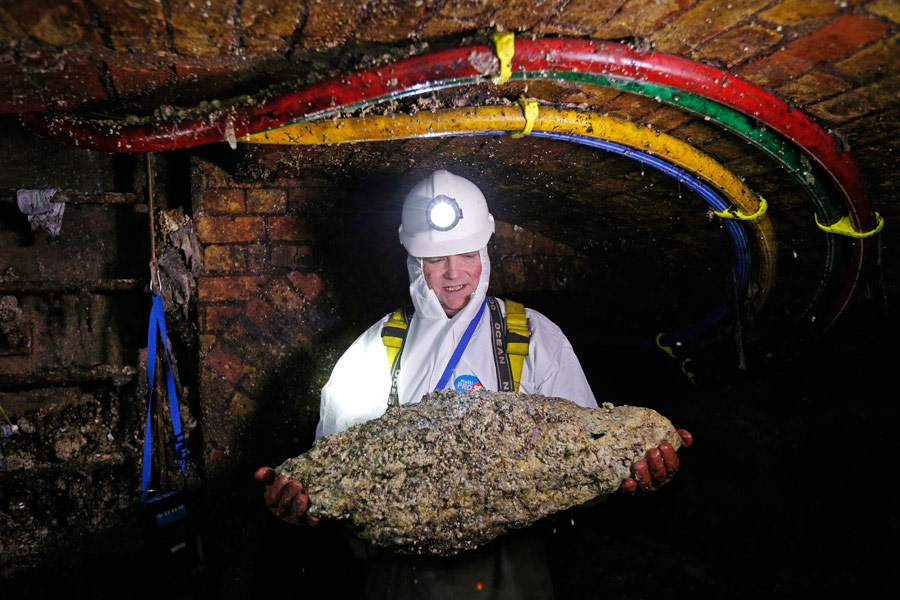 The fat sticks to condoms, baby wipes and anything else non-biodegradable, forming fat boulders. These set hard and grow into fatbergs that have to be broken by hand using a spade or sometimes a high-pressure water hose. There are 80,000 fatberg blockages a year, costing Thames Water customers around £1 million a month to tackle.

A good sense of humour and plenty of dedication is required to work down the sewers; you could tell there was good dose of camaraderie amongst the gang – the sewer flushers. “It is unique being able to go down certain parts of London that other people don’t get to see,” Tim said. “When you look at the size of the sewer system, there’s a London under London. It’s a real feat of engineering. Some of the sewers are really beautiful. The brickwork is just amazing.”

The harness line was dropped down the ladder shaft. The boys on top were fishing. They shouted down, it’s been 2 hours! Surprisingly time went by quickly. It was a challenge shooting pictures and tiring. I shot everything on my wide-angle lens using only the helmet torches and LED light from Helens’ video camera. By now my cameras were pretty soiled. The gloop, the lava, the crap stuck in the grip, straps and buttons of my Canon.

After climbing back to the surface, an epic cleaning session followed. Beforehand, a couple of group photos of the intrepid reporters from AFP dressed in our slightly less whiter than white outfits. Vince rolled onto his back ready for Tim to pull off his waders. Proclaiming he had a hole in his boot, proving it by wringing his sock in the gutter and leaving footprints across the pavement. Business people passed by, quizzically looking in our direction. Some acknowledging the problem of “fatbergs”. 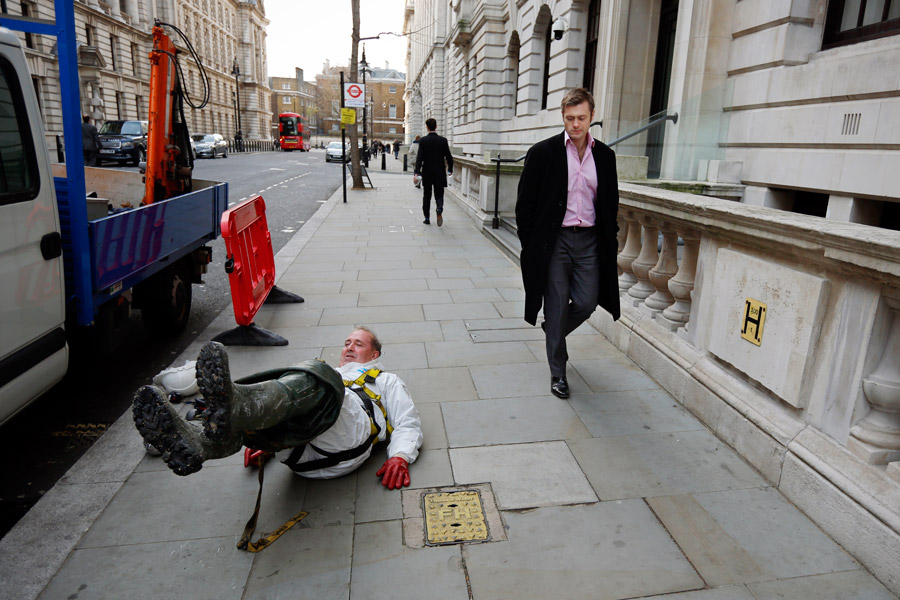 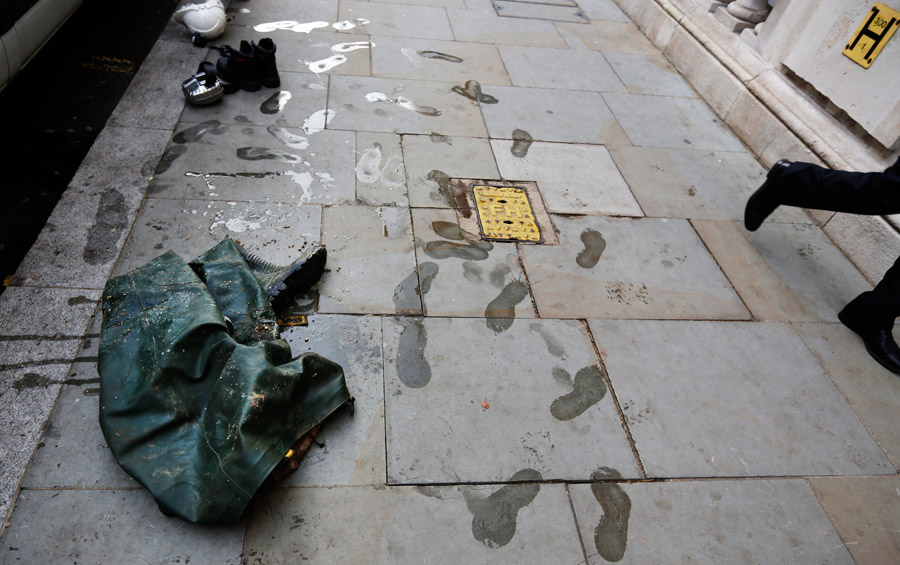 Walking back to my motorcycle to begin the journey home I needed to eat something. Despite washing my hands three times I negotiated a packet of crisps by tipping the packet into my mouth afraid of touching anything edible. Once home my wife’s’ sense of humour evident again as she produced a bowl of chilli-con-carne for my tea. For some reason, it didn’t taste quite how it usually does.