The Open this year at St. Andrews was a tale of extremes. The photographers experienced all kinds of different scenarios. Of course playing golf beside the sea in Scotland always throws up challenges, this year we had pouring rain, extreme wind and the occasional moments of “golden light”. But St. Andrews is one of the harder golf tournaments to cover. It’s extremely physical in terms of the distance we walk. It’s more or less 9 holes in one direction and 9 holes back. The messenger who runs our disks back to the editors looked so tired, collecting a patchwork of blisters on his feet!

The old course shares some of its greens, giving us guys a few problems. We’re unable to get too close and move around the perimeter of the green so you’re not going to get many putting pictures. This is where the players react and have great expressions. However, when the play was suspended because of the wind it opened up other possibilities for photos. The players all crowded into mini-vans beside the course, a caddie sitting on a course marker drying his socks caught my eye! We’re always looking for something to sum up the story.
Another difficulty is there’s only a few places to cross the course, so planning is important at the beginning of the day. My company, AFP, uses three photographers to cover the tournament and we have to make sure we get something on all the leaders, not to mention the big names like Mickelson, Ishikawa, Tom Watson and of course Mr. Tiger Woods. 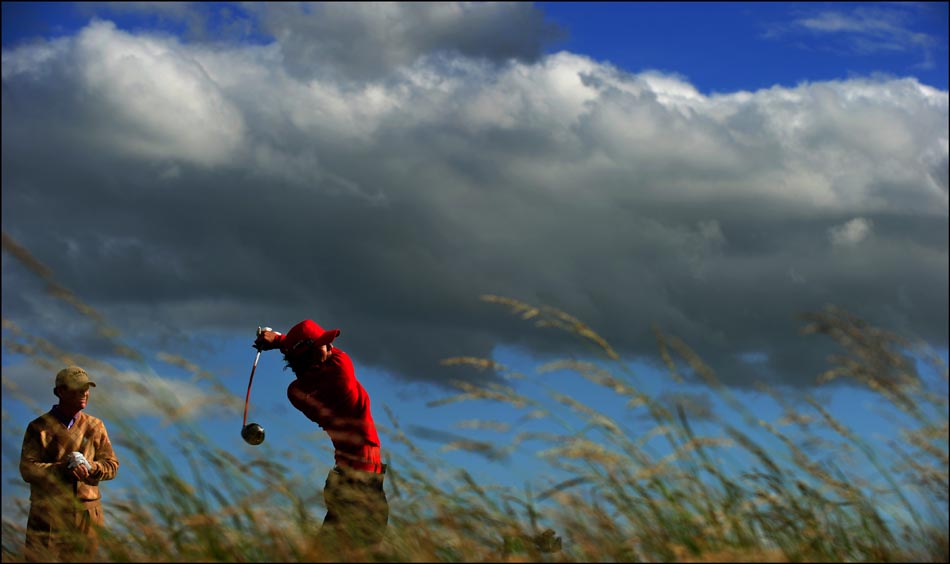 The competition did end in our favour however. Because the weather played such an important part over the last few days, it became obvious the eventual winner was going to come from the final couple of groups. South African Louis Oosthuizen kept a cool head and went on to win by seven shots. It’s good to see another new face win a major, but there wasn’t too much reaction on his part. Photographers are always willing the player jump in the air, throw his club or go down on one knee but this year we had to settle for a brief wave to the crowd followed by a hug from his wife.
Oh well, another Open passes – my third at St. Andrews. I’m starting to turn my attentions to the Ryder Cup now, I’m hoping for more “golden light”, less rain, however I’m sure there’ll be more reaction!