I’m writing a quick 100-metres style blog before leaving for Brazil to cover the Games of the XXXI Olympiad. I just wish I could do it in 9.58 seconds, Usain Bolt’s record-breaking time in the marquee Olympic event.

In a little over two weeks eight men will be readying themselves on the start line for the sprint final – hearts pumping. However, theirs won’t be the only high pulse rates on the night!

Depending on the AFP master plan, I’ll be looking along the start line or preparing to gamble and pan with the runners using a slow shutter speed as they accelerate along the track. Or I might be nominated to shoot from the most stressful position from beside the clock, the athletes glancing over as they speed through. Hopefully I’ll be focused on the right athlete winning as they dip to cross the finish line. Normally, I watch the big stadium screen as the starter fires his gun to see who gets out the blocks quickly. I keep watching the screen right up to the last couple of seconds when I make a decision and pick who I think is going to win and focus on them. You’ll be surprised how few frames there are to choose from of the actual moment the sprinters cross the finish line – even though our cameras shoot a high speed 14 frames-per-second. I hope there is one good picture in there and perhaps 3-4 frames in the sequence, which tell the story. But I won’t have time to look because I’m off running the bend in pursuit of the winner. The photographers’ race is seriously competitive too!

Last weekend I shot the track and field at The Anniversary Games. And I was very glad I did too! It’s always nice to re-visit The Olympic Park where I was lucky to photograph some amazing athletics during London 2012.

My job working an athletics infield, apart from hopefully making some nice photographs, really is all about time management. Last week was a good refresher. For the photographers assigned to cover the infield it’s a case of finding a good position, usually on the grass in the centre of the track. We try and shoot all of the competitors to satisfy our clients who are looking for their countrymen and women. It’s a case of working fast before moving on to the next event and starting again. Occasionally the field events finish simultaneously and being in the right place at the right time for the victory celebration can be tricky.

Meanwhile back at the stadium in Stratford, high-flying Frenchman Renaud Lavillenie was in action in the Men’s pole vault. When the sun shines the event can be great to photograph. Us “artists” lying on our backs pointing our wide-angle lenses into the sky to shoot a silhouette as the jumper clears the bar. 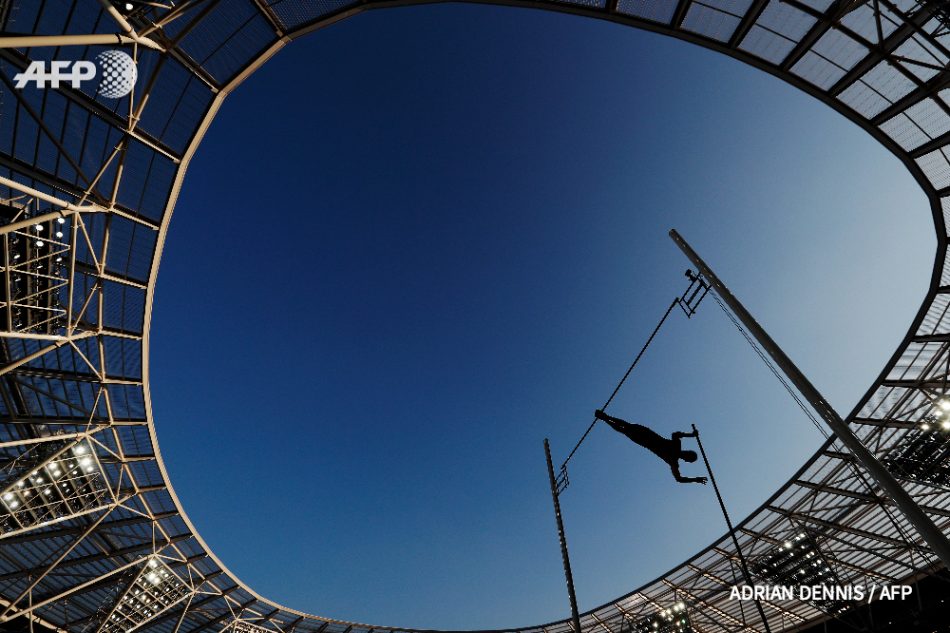 Funnily enough it was even better on Sunday for the women’s competition when clouds wandered across the gap in the stadium roofline making the picture even more dramatic. 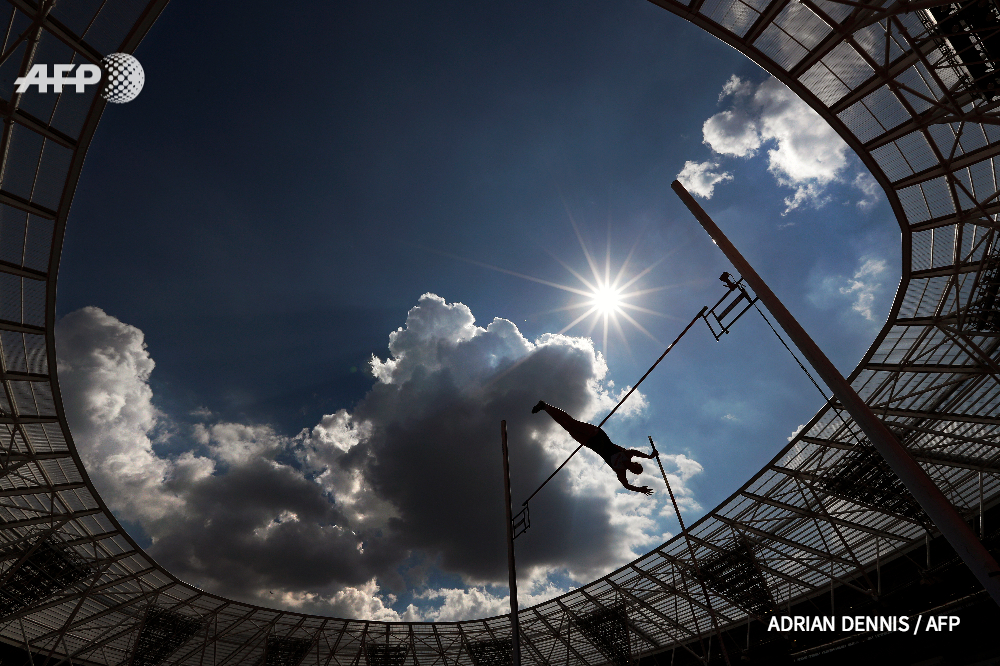 When the light is good it opens up so many more opportunities for the photographer. I think the British photographers get doubly excited as often we’re shooting in grey flat conditions. When the sun is out we go mad for a silhouette. 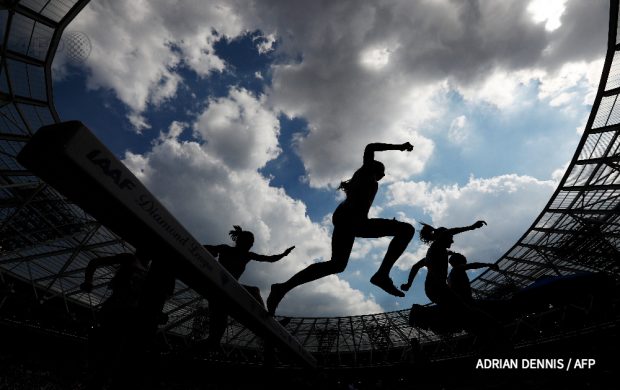 Anyway, Lavillenie is too good, and was almost certainly going to win in London. He typically starts jumping about an hour after some of the other competitors have begun and in some instances have fouled out and are packing up. Because the event was taking so long, it set me back on my stadium schedule and it became a rush to cover the women’s high jump at the other end of the field. Not to forget the races on the track in between. 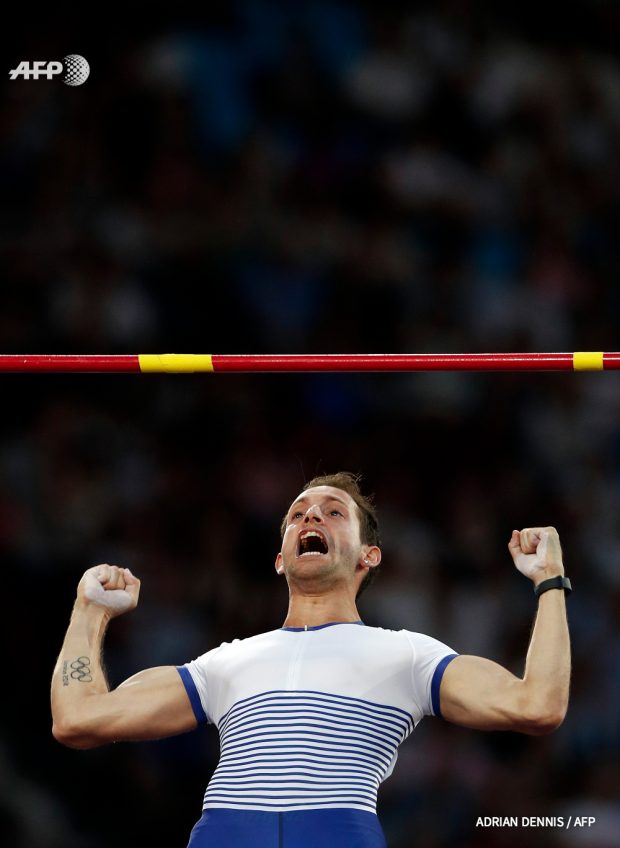 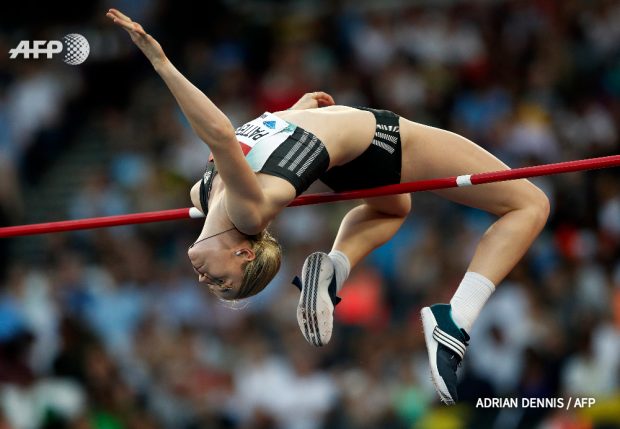 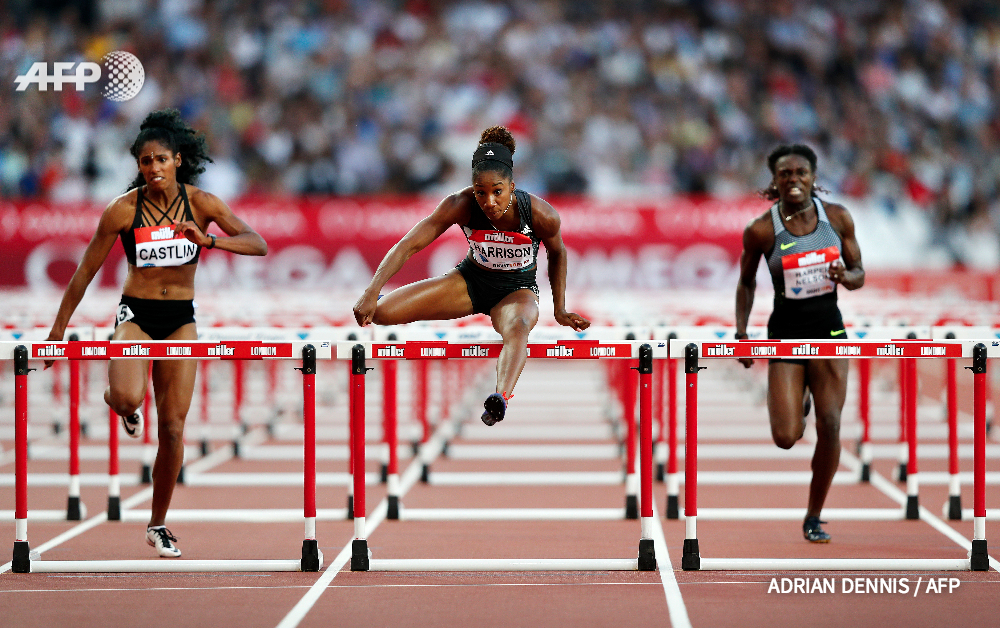 In some respect it’s harder covering the Diamond League because the events go back-to-back, there’s no qualifying races to work out the good angles. As soon as the hurdles are laid out, the race run and another discipline begins. Colleague Ben Stansall and I were covering the event in London. He positioned himself head-on to the finish line while I moved about the infield wary of not getting speared by a wayward javelin.

Spain’s Ruth Beitia (L) jumped a season’s best in the Women’s High Jump and Britain’s Laura Muir (R) set a national record to take victory in the Women’s 1500 metres. While Kendra Harrison of the U.S won the Women’s 100 metres hurdles final breaking a world record in the process 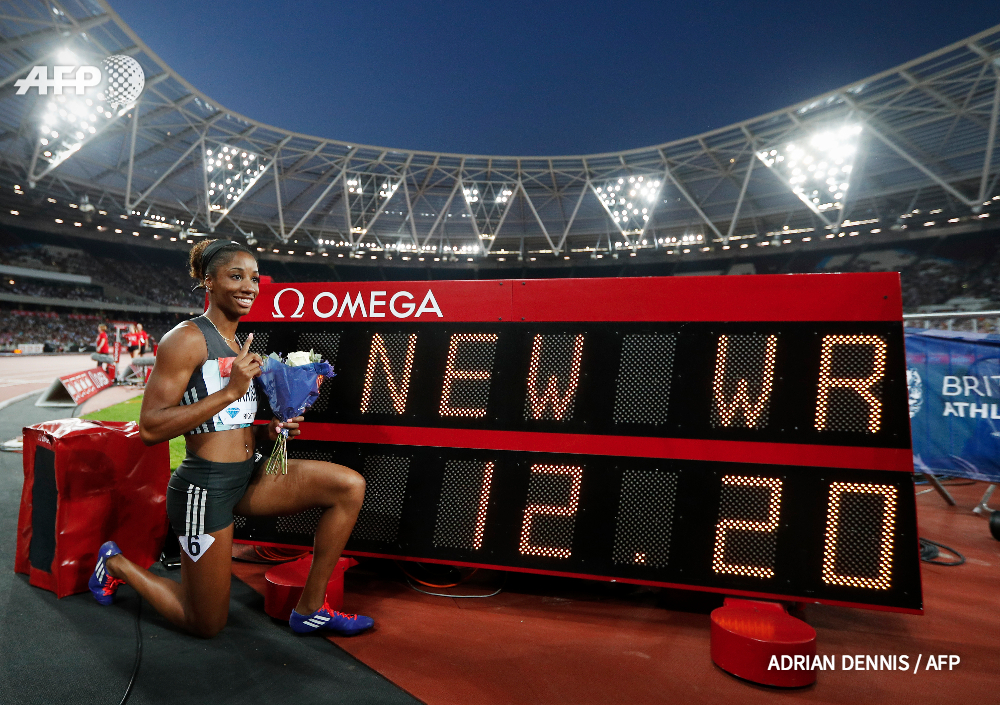 For Rio2016 I’ll be part of a team of seven photographers shooting the athletics. I do have to remind myself that if I miss something I’m sure another AFP photographer has nailed it! 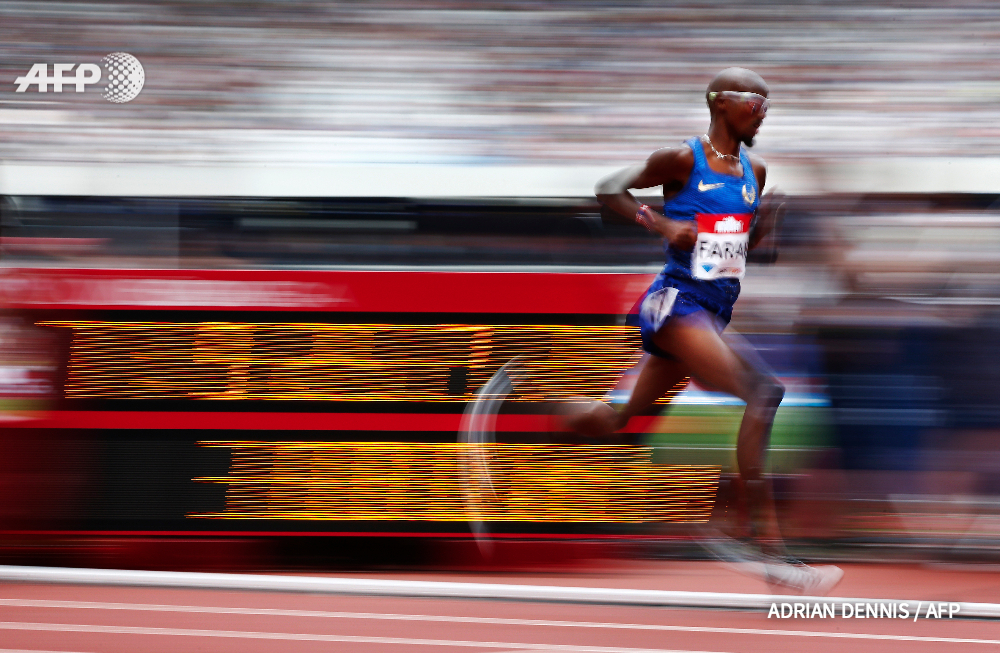 But it’ll be a pleasure trackside in Brazil, despite the thumping heart and high blood pressure. The showdown between Usain Bolt and Justin Gatlin, perhaps running in their last Olympic games, I’m sure won’t disappoint. The two athletes are already squaring up in the mind games department. 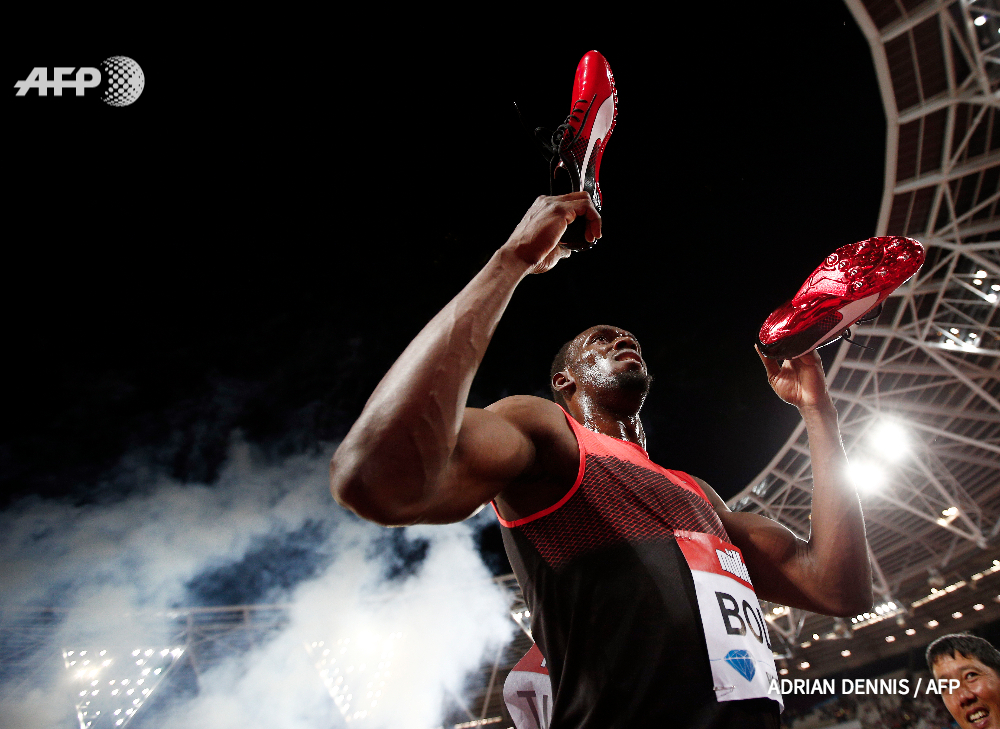 While British duo Jessica Ennis-Hill and Katarina Johnson-Thompson, nightmare names for the commentators, will go head to head in the Women’s Heptathlon. Briton Mo Farah is in terrific form and potentially can become the greatest long distance runner of all time if he secures another double. If so, my heart will be racing too!