One of my recent assignments was to cover the final stage of The World Rally Championships, although heading to Wales to photograph cars speeding through rain-soaked forest tracks isn’t always the most appealing assignments. Having covered the event before, I reserved a rental car, one with an extra big boot for the equipment and an extra bag of waterproof clothing – Abacus of course!
A colleague (Tom Hevezi) and I, set off on route to North Wales,  me behind the wheel, Tom navigating. This year the rally began in Llandudno, right on the northern tip of Wales. Upon arrival, we picked up our credentials, signed our lives away and were issued with the stage maps.
Without stating the obvious, motorsport can be dangerous, and to get “free rein” for that extra special photograph you have to sign on the dotted line….. the organisers don’t take any responsibility for photographers and in return we have carte-blanche to stand, kneel, hide wherever we want on the course. It’s not for the faint-hearted peeking from the hedgerow while a car speeds along a stony road at 80mph. In the dark.

The hardest part of the job, apart from getting the car in focus etc etc, is getting to the stages with time to spare to find the “best” or most realistic place to stand. The first day was luxury! The competitors were racing on The Great Orme, a mountain-hugging road on the coast of North Wales. The sun was shining too. Shock Horror! The biggest problem photographing rallying is the best cars come first, logic similar to horse racing. There’s no chance to experiment with the angles and you only get one chance. Multiple world champion Sebastian Loeb is usually first around the corner. Being a Frenchman, and for me working for AFP (Agence France-Presse), he’s the one I need! I picked my spot, high up on the hillside basking in the sunshine and waited. 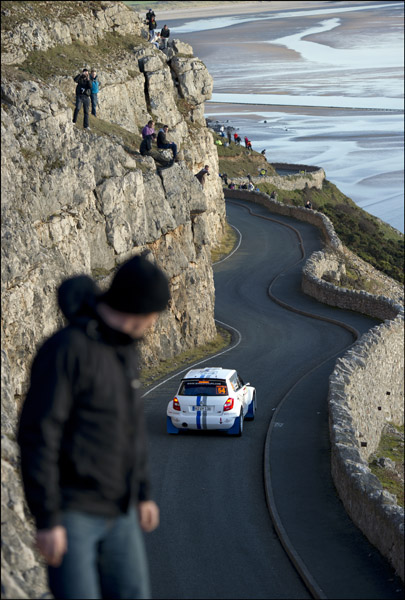 The rallying fans start to arrive, and like us dared to perch on the edges of rocks looking down on the cars. The chance to wave and cheer their favourite driver makes their day. Others like the brands – Fords, Citroens and the “barking” Minis. Once the racing starts you can hear the cars in the distance, marshals blowing excitedly on their whistles to warn of the impending 300 horsepowered car coming sideways around the bend. The sounds are like none other. The whistles, the engines red-lining, the cars “banging” through the gears and occasionally tyres screeching followed by a uncomfortable sounding crash. It ain’t the way you’d treat your own car. It’s unmistakeable.

The real work had begun, we edited our pictures from a small tea house stuffing our mouths with cake while “doing” an edit and a bit of Photoshop on the laptop. The crumbs get in the keys! The last competitor was through and back to the car, we needed a phone signal to send the pictures – time was ticking. There’s always a deadline!

A two-hour drive to the guesthouse somewhere in Mid Wales beckons, a shower and a glass of beer before bedtime. We needed to be rolling again at 5.30am just to find the stage and take position.

Next day was more familiar Wales weather. Rain. Tom navigating, we found the village and drove along a farm track. Flashing our passes and credential we were through a road block and driving into the wilderness. There are no rally fans coming this way. For us, we need to quickly get in and sometimes out to keep up with the rally. Once parked, waterproof clad, I made my way into the forest with 3 cameras. Once in, I knew I wouldn’t be back for a while.

I chose my position on a forest track, set up a remote camera and perched myself 4-feet up a bank. I’m on the outside of a slight curve, a bit dangerous, but high enough to hopefully avoid any out of control cars. Always the potential to dive further into the trees if all goes wrong. And I can hear a car, engine whining, Loeb was on his way. I’d been envisioning my picture over the last hour or so – would it work? The remote camera gave me another chance too. And the lead drivers slid their way past kicking up fist-sized stones, some thudding into the mossy bank upon which I’m kneeling. One catches me on the wrist, that’s pretty lucky – if my hand wasn’t there it would have pinged right off my lens barrel. How long can I leave the remote down? After four or five cars (the leaders) I’ve got to retrieve it. It’s a only a matter of time before a rock connects and goodbye camera. Not only that, but the gear was getting splattered by mud. We’d be looking for a chemist later and a big bag of babywipes to clean everything. I knew I’d forget something. 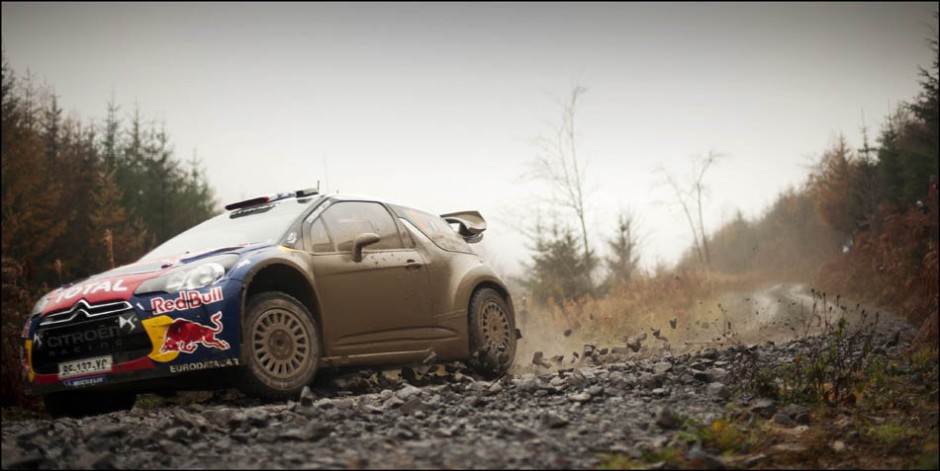 A stone too close!

Now we had to send the pictures, and that was going to be a problem. I haven’t had a phone signal all day, let alone the necessary 3g signal needed to transmit photos. We’d try our luck and knock at an isolated farmhouse. Luckily the lady obliged, she had wifi. Accepted the offer of a cup of tea, a quick stroke of the dog, but hold on, she can’t remember the network password. We’d have to wait for her son to return home. But it was warm and dry – a good place to edit. But there was a way, there usually is. I managed to log on to a British Telecom network using a separate account I keep. I have two mobile network dongles in my bag to send pictures plus a subscription to BT. It’s frustrating having a good photo if you can’t send it! It paid off. Pictures sent, I’m back out on the rally course and we’re doing it all again. Now it’s dark, the other end of the day. And the process starts all over.

Later, after driving 90 minutes we checked into one of the nicest guesthouses I’ve ever had the pleasure. Shame I only had 6 hours to enjoy it. We were leaving early next day. But breakfast was left out, we were happy. Today featured the “Sweet Lamb” stage. It’s a bit of a gimme for photography. All the rally “snappers” congregate – there’s a mega water splash. If that doesn’t “float your boat”, then one of the jumps might do. Plus the sun was out. Nice! We played here, so many different photo possibilities. But so many pictures. Editing would be a slog. We drove away, heading for the nearest mid-size village – one with a phone signal. A jolly nice tea house selected with all the necessities, chair, table, power, coffee, victoria sponge cake. Ahhhh but those pesky crumbs! Another day done and dusted and the end was within sight. One day left.

The Water Splash at Sweet Lamb

Again, up super early and on the stage by… too early. And it’s cold. We were somewhere in the middle of a moor where the army train. Bullet casings lying around, I found my way into a tin hut to disrobe and put an extra thermal layer on. Some of the hardened rally fans had been sleeping here, beer bottles for evidence and a toilet ñ letís just say not flushed! This time I knew where I wanted to be. Years ago, last time I was here a car rolled about 9 times in front of me. I’m heading back there! But I needed to hike 2km to get there. The cars are coming through at 7.12am. Better get a move on. This time it was a bit disappointing. Nothing rolled, crashed, spun or blew up in front of me. But the sun finally came up. It was pretty.

Back to the car and we’re heading for Cardiff and the podium. It’s easy from now. But wait, Sebastian Loeb, rally leader and soon to be World Champion had crashed. Word spread quickly even across the top of a moor in Mid Wales. Do we divert to try and find the car wreck and jeopardise getting to Cardiff? We couldn’t risk it. Luckily, we arrived with plenty of time, marked a spot on the photographersí gallery and waited for the show to begin. This bit always seems to be an anti-climax. We all had a “buzz” from actually getting around another rally without any mishaps, nothing broken, equipment or bodies. Champagne sprayed, shutters click and pictures sent.  Before long we were driving back over The Severn Bridge and heading home. Seven hundred miles in the last five days and I was glad to be home. The washing machine would be busy, no chance of the spin cycle keeping me awake. 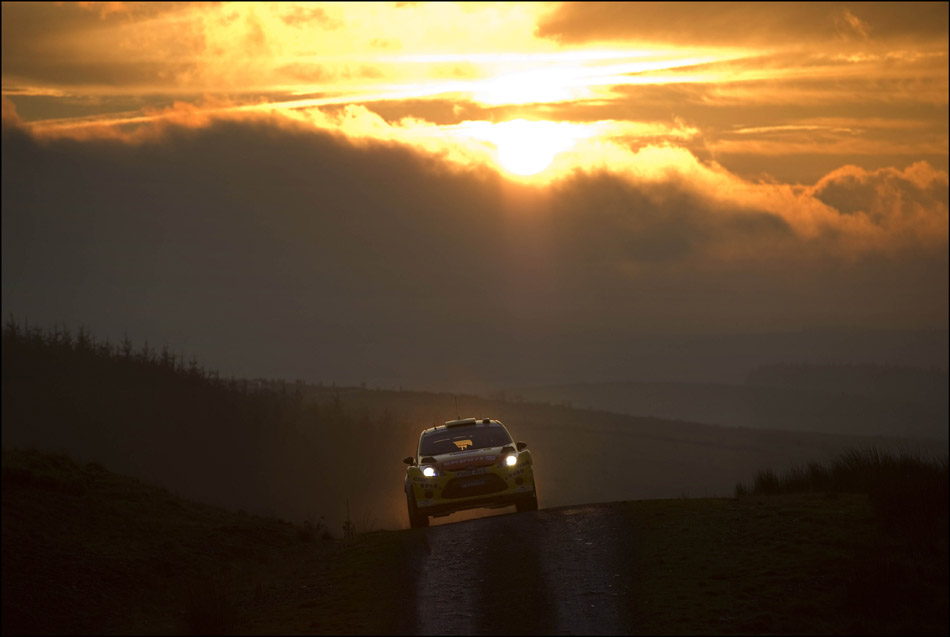