The Ryder Cup trophy is back in European Hands!

What a week. One of the hardest assignments to date. The Ryder Cup had a bit of everything and what a finish! I arrived to cover the golf on the previous Sunday, the first few days spent learning the course, the best angles on the greens and how to make the odd shortcut to avoid those extra few yards. I’m glad I did, one week later my thighs and calf muscles are in pain! 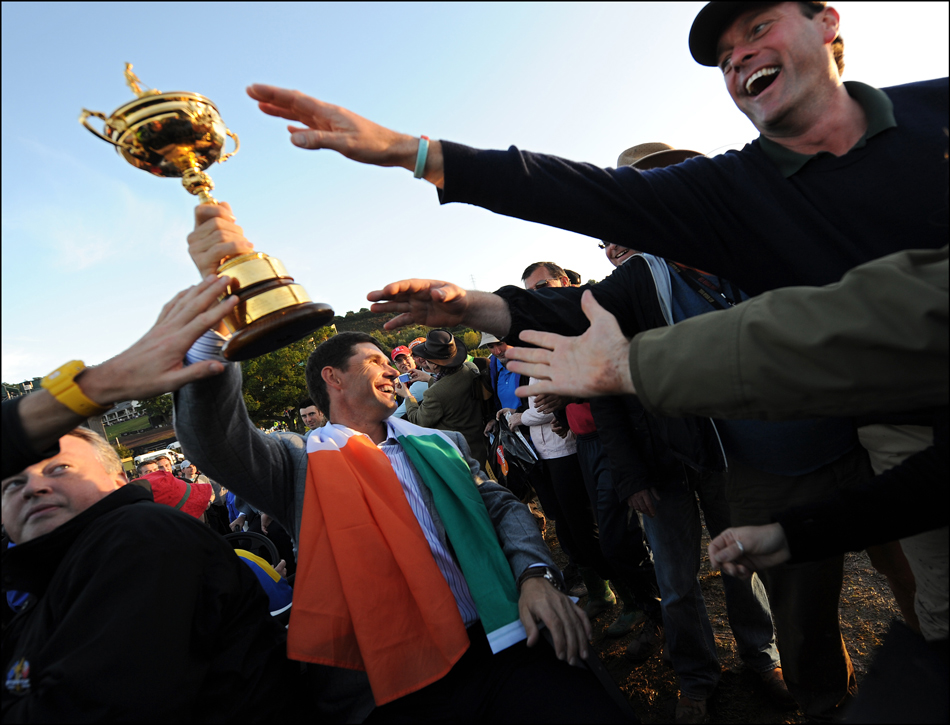 The first day of competition came along as well as the rain. And it poured. I went out with the Tiger Woods fourball. We only made it to the fourth fairway before the match was postponed. The golf course was saturated. It was difficult for the golfers and super tough for the photographers. It’s not a good feeling having thousands of pounds of cameras and lenses wrapped in a flimsy waterproof cover. Despite the rain going sideways, I was doing OK, the Abacus gear holding up well. Although the cameras were getting wet and steaming up. I found myself peering through one side of the viewfinder – the part I could actually see through. The drying cloths in my pocket working overtime. Eventually the game was suspended, Europe team Captain Colin Montgomerie sped past in his buggy spraying rainwater from each wheel. I trudged back to the media centre for a cup of coffee. The photographers room was adorned with jackets and trousers. Every possible place to hang an item of clothing was taken. A queue formed in front of the air conditioners, before long the air was thick and humid. The editors were struggling to send the pictures amongst the banter of nearly a hundred or so photographers. Six hours later we were heading out on the course again. The organisers were desperate to finish the matches otherwise we were heading for a Monday finish – the first in Ryder Cup history.

During the next two days the schedules were re-jigged amid more rain and we were into Monday. It turned out beautiful, off we went with the singles. Europe needed five points, we’re all trying to predict the ending. You have to be there on the winning putt otherwise no cigar! As the matches developed we thought we’d be looking at one of the Molinari brothers winning so we had a photographer with each group. An American colleague went with Francesco, I chose Edoardo. When I got to the 13th green I began to realize we were going to the wire. All the time trying to adjust our plans using walkie talkies with our team. I ended up on the 18th with Molinari hoping he’d go crazy winning his point. The American Rickie Fowler, won the last three holes and halving the point leaving me stranded at the end of the course. I ran the length of the hole, long lens on shoulder to try and make it back to the 17th to catch the McDowell match. Pushing through the crowd, dripping with sweat I made it to the green before they teed off. I had made it, I lined up in front of McDowell’s ball, however I’d have preferred to be on the other side of the green but it was too late to change. McDowell putted, Mahan conceded and the match and The Ryder Cup was won. Pandemonium ensued as hundreds of fans invaded the green. It was tough to get in. I pushed and squeezed through the fans, there’s no time for politeness on these occasions. I’d never seen a golf green get swallowed by people so quickly. After half an hour or so the celebrations had finished. Still, we had the closing ceremony to do. It wasn’t quite over!