Being a motorcycle fan, I was lucky to draw the Weston Beach race last weekend. The race is extreme. It consists of hundreds of moto-x and enduro bikes, sidecars and quad bikes racing down a 1.5km section of beach close to the  Bristol Channel before turning toward land and negogiating man-made (bulldozer-made) dunes and pits. I’m sure the course designer takes pleasure in building a course to test the mettle of the riders. The obstacles range in height from a mere 5ft up to 20-odd ft high. Sometimes getting up them is a major challenge but then there’s the drop-off the other side. Several riders literally topple off and go straight over the handlebars. The race lasts 90 minutes for the kids and 3hours for the big boys. It’s a test of endurance for man and machine!

I covered the event two years ago, but only on main race day. This year I rolled into Weston Super Mare Saturday morning. Parking my car on the beach, past the “High Tide” warnings was a bit nerve-wracking. I found the press desk, signed my life away as is usual with motorsport events and got stuck-in. 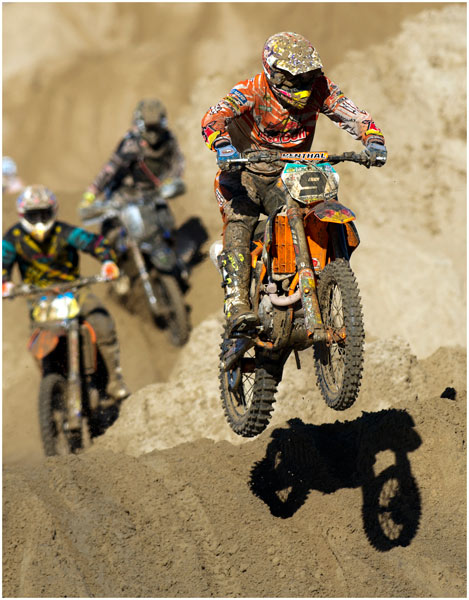 The first day I travelled light. Two cameras, a 70-200mm lens on a older Nikon D3, and a 24-70mm on one of my “good” D4’s. Despite the sun being out I clad myself in two jackets, waterproof trousers and woolly hat. Then turned my attention to the cameras. Waterproof covers on both – tightly wrapped. The beach race can be brutal not only on the bikes, but on un-protected camera equipment too. No matter how well you’re prepared, something gets sand in it, on it, around it. I made my choice of gear, I wouldn’t be changing lens today.

I arrived a day early this year to scope out the course properly. Saturday featured the quad bikes and sidecars. You can hear the roar of the engines as the riders set off. With the pier providing the backdrop a great plume of spray rising into the air half a mile away. The riders come past, some flat out, they must be doing 80mph with their front wheels skipping and dancing across the compacted sand.

The first lap over, the riders spread out. I took a position on a high dune watching as the bikes and quads head straight toward me through a massive water-filled section. Although heavily backlit there was a problem. It looks brilliant when the water sprays high into the air. A fast shutter speed freezes the water droplets, but it’s tricky shooting into the sun all the time. The pictures generally go really dark with intense highlights. Such a shame not to include the deep blue sky. “Going” with the light looked nice, but the bikes were mostly riding away. You really want to see the riders’ face. There’s rarely a perfect scenario for a good photograph. I was most preturbed about the backlight, it threw me off my game for a while. 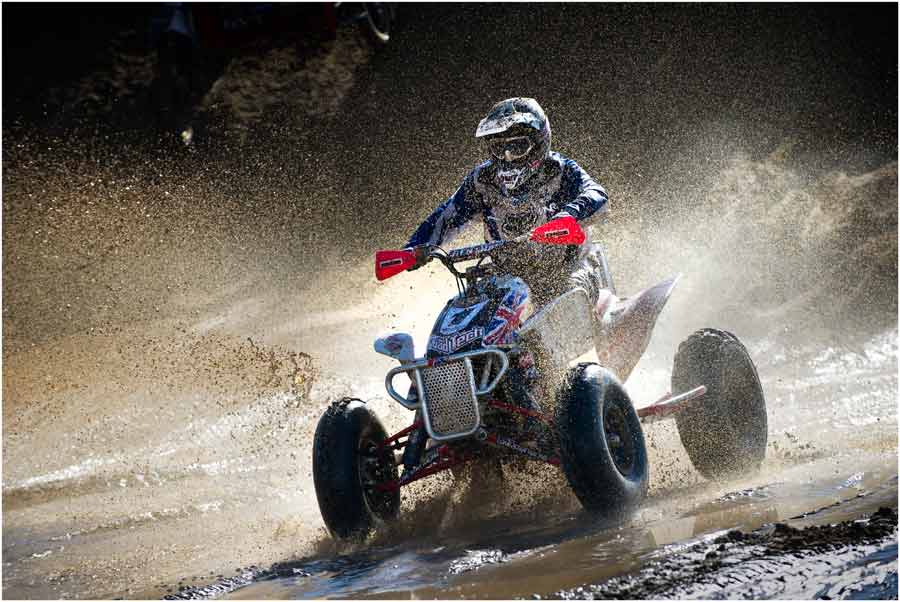 A colleague, Carl de Souza, shot a brilliant picture several years ago. One I would like in my collection. The first “major” dune usually provides  a problem. Three hundred riders trying to funnel over a hill of sand 20 metres wide will always be interesting. When I covered the race before, I chose the wrong dune. I plumped for one of the biggest ones, that year they all zipped past on the opening lap only to all crash and stall and get stuck in the sand 100 metres further down the track. Very frustrating!

Being such a long race, there’s 3 hours to get through, You can work on the features. The slow-shutters, the silhouettes. It’s actually too long to shoot for. You run out of ideas or just get too tired. Even though you’re travelling light, it’s hard work climbing sand dunes without  the use of your hands. You can’t put anything down. Cameras get heavy hanging round your neck all day. Luckily the race is sponsored by Monster, one of those energy drinks. With one down your neck, it gives you a few more minutes work time!

This year would be different. I was here early, the sun was out, I had a pair of goggles. I was going in! Come the main race day, I parked somewhere safe, somewhere the tide wouldn’t swallow my car. One more niggling question running through my brain solved. Three cameras today, all wrapped and ready to go. I had plenty of time to shoot, and loads of time to edit. I had a paintbrush in my pocket…… (to brush the sand off my gear) I was determined to make a nice picture this time! The youth race went first, I marvel how fast some of those boys ride. I can ride a bike and have for 30 years now, but I wouldn’t be able to keep up with those lads who haven’t even reached their teenage years. Although just for the record, they don’t go over the monster dunes, they save them for the consenting adults. 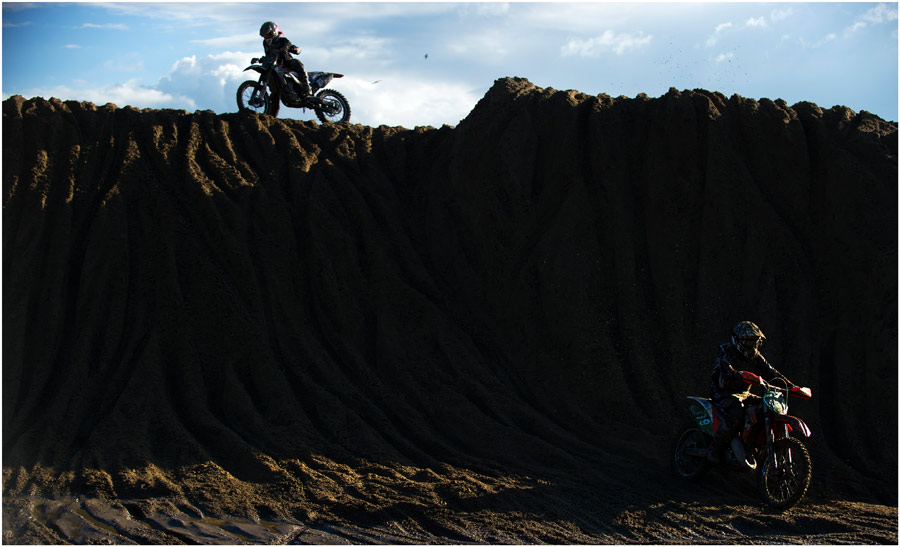 The main race began at 1pm. I trudged down to the 1st dune just past noon. Still hesitant about choosing a dune I went with the first “big-un”. On top I was greeted by a friendly marshall who sealed my decision – they’ll get stuck ere! It’ll be carnage. The engines roared, the race began, I watched the bikes speed down the beach and past. They’d be here in seconds. Standing on the side of the dune, just behind the flag-wielding marshall, expert riders took the dune with ease. They were over and gone. Eight or nine bikes came past. Then one rider fell, the next one crashed into him and seconds later there were bikes everywhere. Throttles wide open, bikes screaming, sand spraying from the knobbly tires. I kept my camera with the wide-angle to my face and walked in. A mixture of steam, smoke and sand flying into the air I kept my left eye open to make sure any bikes suddenly didn’t lurch over the lip and over the top of the dune. I was fair game, no one was going to stop on my account. In fact this year there was too much carnage. No one could get over. With 20 or so riders stuck in varying positions on the upside, the pack – hundreds of riders sat behind. With their adrenalin up, a rider broke through the waist-height metal barriers and rode around the dune. Their race was back on. Within a minute or two most of them had gone, leaving only a few stranded in front of me. I managed to have a quick check on the back of the camera, I shot around 80 to 90 frames. The exposure looked alright. I hope there’s a good one in there somewhere. Only another 2hrs 55 minutes racing to go. 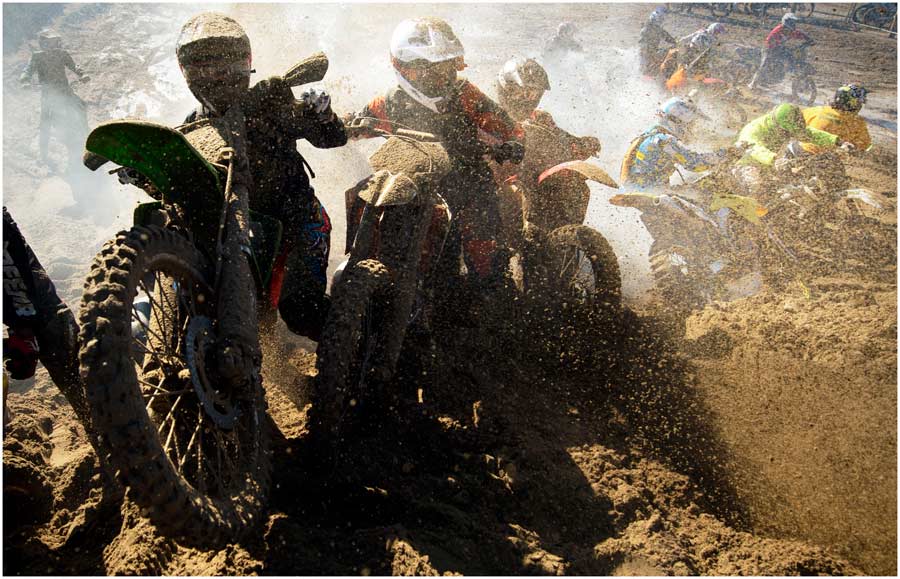 With the race over I went to wire. I headed to the makeshift press room turned on my laptop to download my pictures. My god, I’d shot nearly 2000 frames. There better be a good one!