Three days on and I’m now recovered from what felt like one long – albeit only four-day long – extravaganza: The Queen’s Diamond Jubilee celebrations. Recovered, but still not quite dried out! For more than a week before it had seemed as though everybody was checking the weather forecast and wearing a pained expression. Middle of June, nothing but rain on the radar…….. 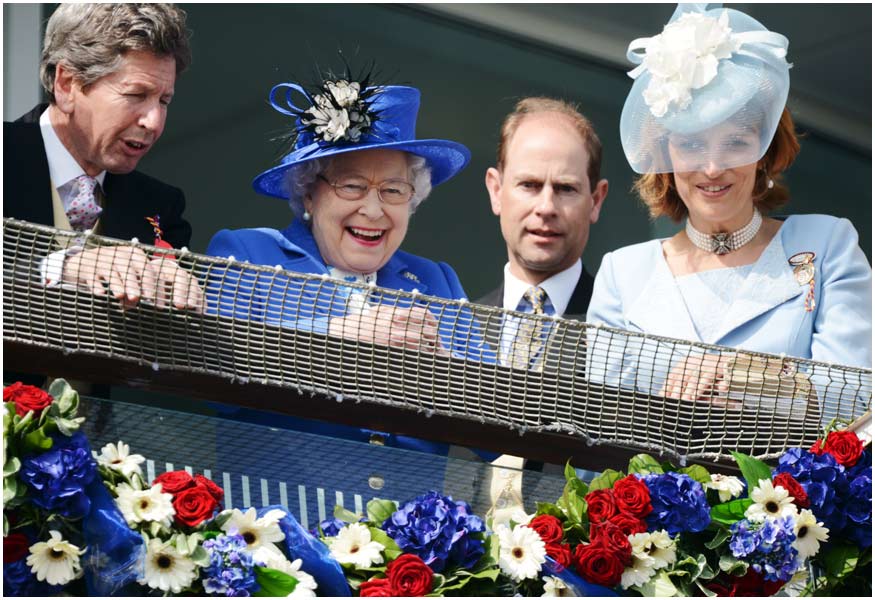 Her Majesty began the official celebrations at Epsom for the annual running of The Derby. We always cover The Derby although due to the increased interest this year we trebled our manpower for the world’s oldest horse race. The Derby was first run in 1780, although I don’t think AFP covered that one! Colleagues Ben Stansall and Carl Court were assigned to photograph the Royals, I took care of the sporting action in Britain’s richest horse race. Saturday morning and surprise, surprise the sun is out! Always a bonus not getting wet while working as is not breaking any camera gear before the job actually begins. This year drew thousands of race goers sporting Union Flags lining the home straight and Royal Enclosures. While I spent the first few hours wandering around “doing” features I kept an eye on the Queen in the parade ring before the big race. Even though I had been assigned the sporting action of the day I knew that anything the Queen did on this particular Derby Day would overshadow the race itself. With a few hundred frames of patriotic punters and Her Majesty smiling while looking at horses, one of her favourite pastimes, I headed off to find the photo editor, Dan Sorabji, to drop my early pictures. We’re off to a flyer! 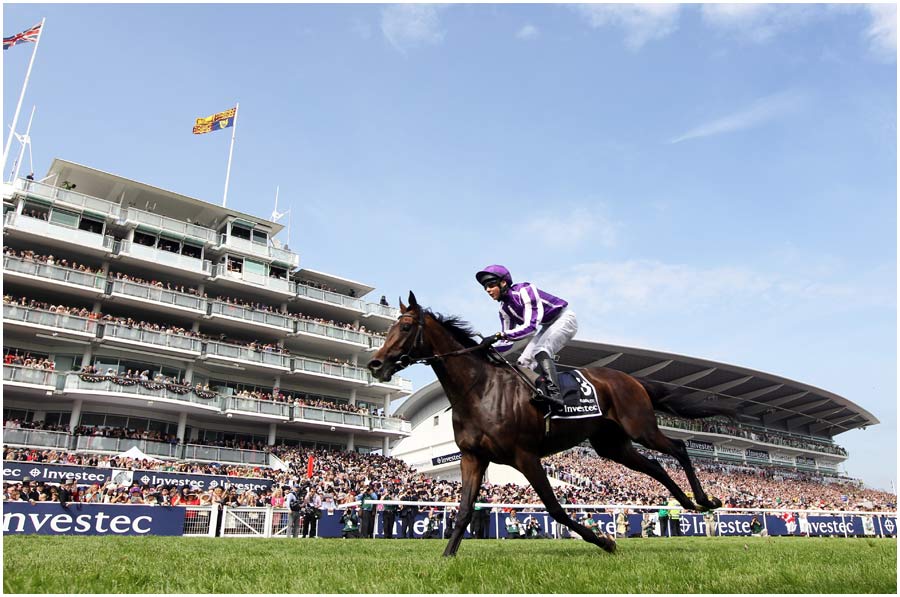 Joseph O’Brien rode to victory on race favourite Camelot. The nineteen year-old jockey, son of trainer Aidan O’Brien, rode an ice-cool race to become the first father/son, trainer/jockey to land the big race. A good story for the sports pages, but I knew Sunday’s newspapers were going to be all about the Queen. 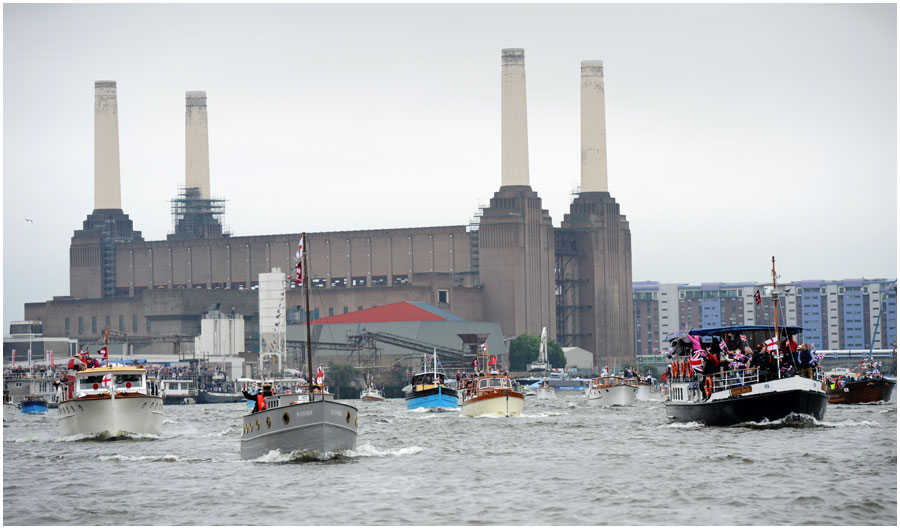 Leaden skies signalled the rain was coming and I was assigned a spot in a small, roofless motor boat during the river pageant! This was one of the main events of the Jubilee with a flotilla of 1,000 boats assembled on the Thames. We had the task of trailing the behemoth golden royal barge, The Spirit of Chartwell, along the river from Battersea to Tower Bridge. Originally our motor boat was to manoeuvre alongside the Royal barge throughout the journey, but, due to fears about security, the plans were gradually changed and whittled down to such an extent that we would only be moored alongside while the Queen boarded the barge. Once she had sailed past, that would be it. We could then only follow from a distance… a long distance. Despite countless emails and phone calls trying to bargain an improved position, what had been a great opportunity to photograph the Queen had turned into a very average photo position. And then it really started to rain! In the face of adversity press photographers get down to serious banter, it really is funny being part of it although it’s probably quite scary to anyone else! The banter began! Soaking wet, not being able to transmit photos because of saturated 3g networks, toilet humour reigned. After five hours with no facilities on board, the bailer became handy for some, others went over the side while we passed underneath a bridge – it didn’t seem ideal to go before the thousands of spectators lining the riverbanks! “The Royal Wee!” 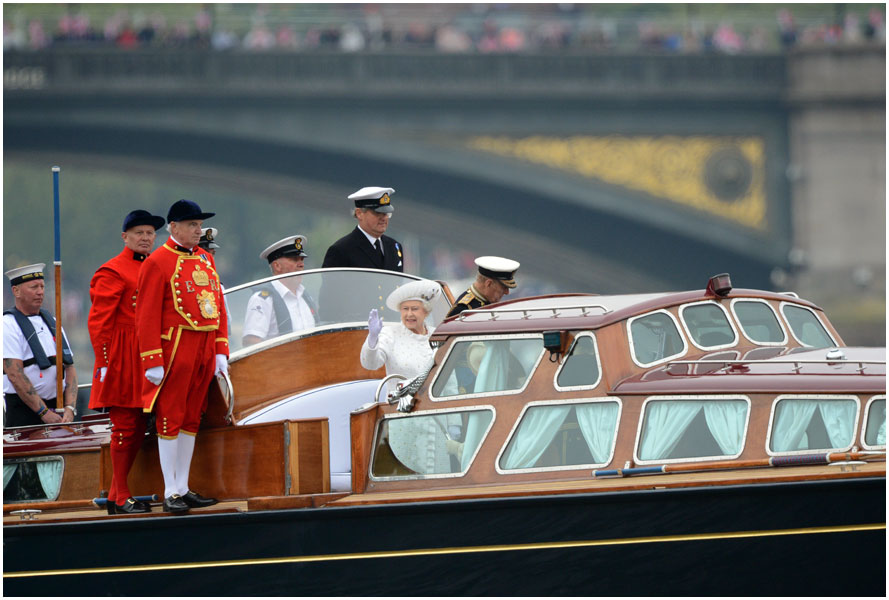 Towards the end of the procession, we persuaded our boat’s captain to join the flotilla and do a “flypast” alongside the Queen’s barge. With nine photographers, each with long telephoto lens primed, we sailed down river close to the Queen. I’m convinced Prince William and Prince Harry were smirking behind the Queen as our little white motorboat joined the squadron of classic boats while I could see a look of what I’m sure was disgust on Her Majesty’s face!

Eventually we were dropped off on a deserted and locked pier, way past Tower Bridge, and the race was on to begin editing and transmitting pictures. Funnily enough there seems to be a shortage of trendy East London coffee shops. The only establishment available was a moored barge converted into a bar. We lugged our sopping wet gear on board and plonked ourselves down in the middle of a packed bar with a karaoke afternoon session in mid flow. The MC joked that the talent scouts had arrived and much banter went back and forth. We had soon outstayed our welcome though and within ten minutes the atmosphere had turned nasty. The bar owner took the microphone and to a backing song of “Hungry Like the Wolf” he was shouting: “Why don’t you all F**k Off, coming in here, dumping your gear down……!” We were heavily outnumbered, in Southeast London, it was time to go. But I did laugh at the sight of one of our gang trundling along the street with thousands of pounds worth of wet camera equipment loaded into an abandoned shopping trolley. Classic! 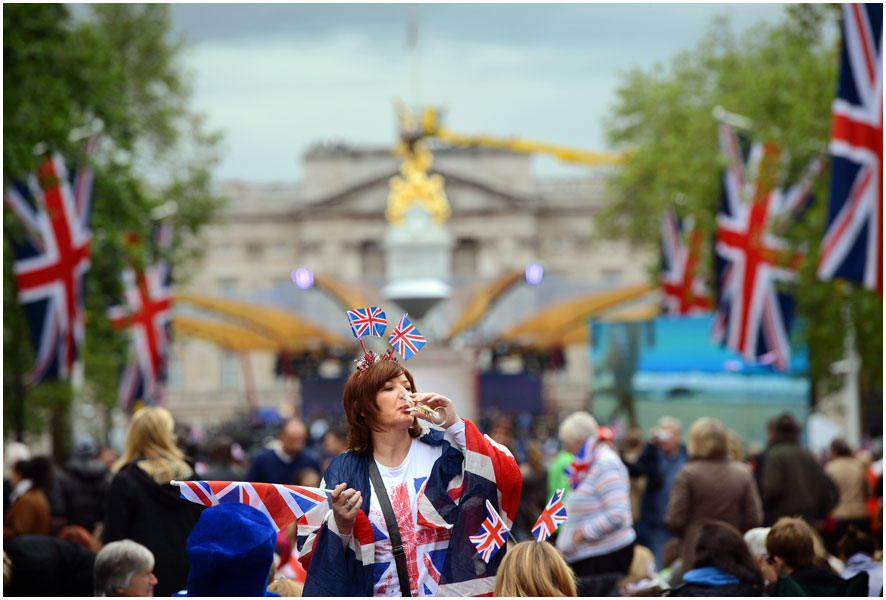 By Monday, the pressure was off me. I simply had to go and mingle with the royalists lining The Mall waiting to see the evening concert and shoot features. Surprisingly I enjoyed being among the crowd and chatting to people. I do wonder though what makes people want to stand in the road for hours, if not days, in the hope of catching a glimpse of a pop star or member of the Royal Family. But we’re all different. 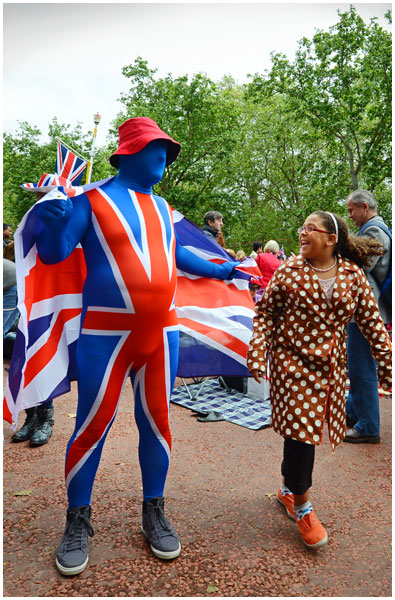 Certainly the man wearing a head-to-toe spandex Union Flag suit must be! As the sun began to set, shafts of light streaked across one section of The Mall. I was drawn to photographing the people dancing and waving flags trying to frame them in the golden backlight. Within minutes there were five or six photographers shoulder to shoulder vying for the same section of road. “It’s tricky, but there must be a picture here somewhere!”

Home at 11pm, my wife re-heating my roast chicken dinner in the microwave and every kind of lithium battery sitting on different chargers in the kitchen. I needed to be away at 5am the next day. But the final day is in sight. Hurrah! 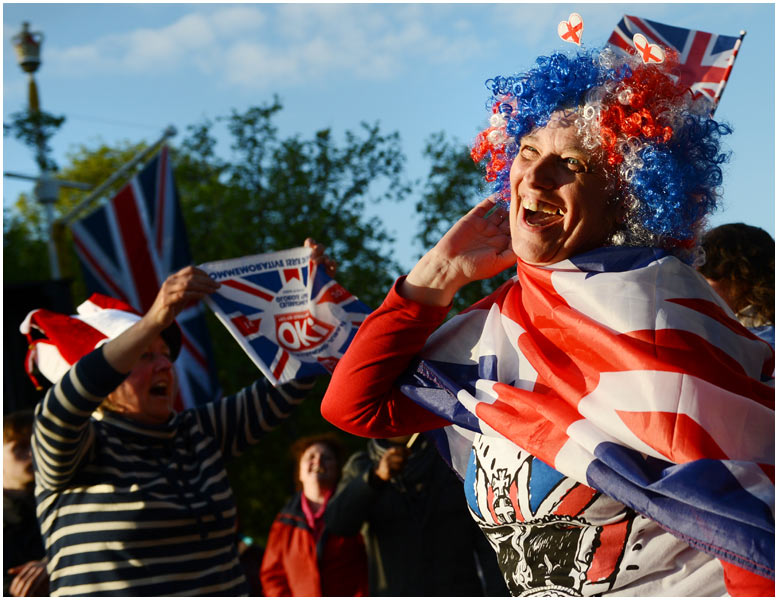 An early morning rendezvous in front of Buckingham Palace and I heaved my Peli case up several flights of steps to the top of a bleacher overlooking the Queen Victoria Memorial. At eye-level with the crowns on top of the flag poles in front of the Palace it really was quite a unique view. My “money shot” was quite simple: a wide angle view of the Queen returning in her carriage after the service at St. Paul’s, followed later with a general view of the thousands of people crowding in front of the Palace as she waves from the balcony.

I had several hours to deliberate and chose a position to clamp a camera with a remote trigger onto the railing. Do I include the crown and flag pole in the frame or not? Occasionally having too much time sows seeds of doubt. I picked a spot for the remote to double my chances and sat and waited.

Six hours later, we’re getting close; the Queen is on her way back. I can see it all playing out on a huge screen placed beside the Palace. Hmmm, is that camera in the right place – oh no, it’s raining again! Quick, go and wipe the front element, run back and pick up another camera. Bite my finger nails, adjust this, change that. It’s moving fast now! I can’t help thinking it will all be over soon………. 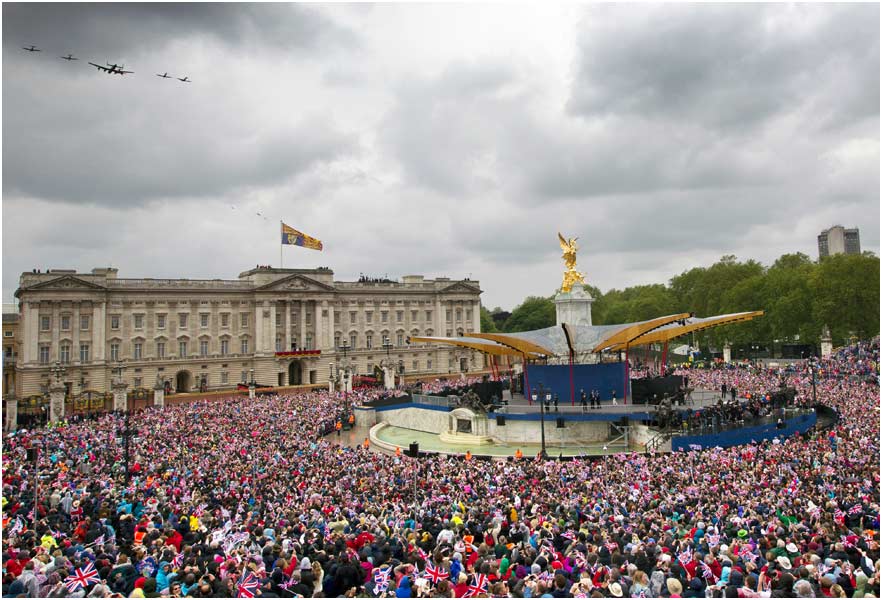