I was undertaking my annual pilgrimage this week, back at The Open for another year. This time the venue being Royal St. Georges in Kent. Luckily for me, a mere two hour drive from home instead of the usual ten to somewhere in Scotland. I arrived on the Monday, picked up credentials, said hello to all the familiar faces I see at this yearly event. It only seems like yesterday I was walking past the Swilcan Bridge and down the 18th at St. Andrews. How time flies! But it seems quicker this time I think – The Ryder Cup in between. 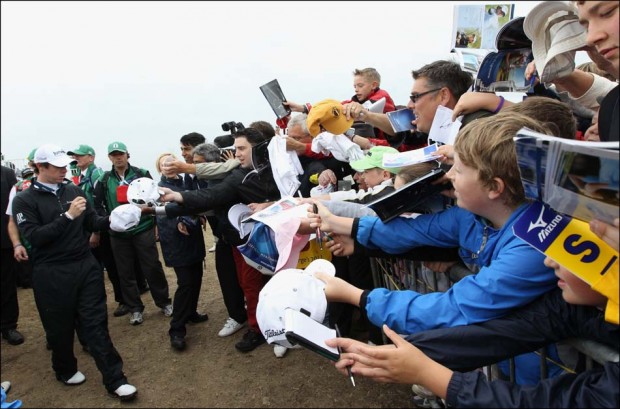 I grabbed the course map, I’ll need to commit to memory. A quick walk of some of the holes, a few feature pictures in the “can”, and a quick meeting with the AFP photographers, Glyn and Peter, the two photo editors, Celine and Paul and Simon the messenger and we’re off for another year. I’d covered an Open here back in 2003, some of the signature holes slowly coming back to me. I remember the chimneys! There’s an old power station close to the course and the cooling towers can be placed in the background for a more unusual golf photo to “place” this years’ tournament. I’m trying to find that slightly different angle, hopefully no one else has spotted.

This Open was to be slightly different from many of the others I’ve covered. I’m not by any means a veteran, but I’m now into double figures on Opens.  I’m slowly getting the hang of it! It’s different this year with the omission of a certain Mr. Tiger Woods. When Tiger plays we assign a photographer to cover his every move on the course. This year the new Messiah is McIlroy. Earlier in the year, Northern Ireland’s Rory McIlroy nearly won the Masters, followed by cruising to victory in the US Open. He’s the man of the moment! The opening day saw McIlroy paired with young American Rickie Fowler and veteran Ernie Els. The decision was easy, I assigned one photographer to follow their whole round. There’s a bit of McIlroy mania happening right now.

I chose to “float” around, learn the course, look for different angles, find all important short-cuts to allow me to jump forward and back around the course just in case there’s a surprise leader. But also to keep all our foreign clients happy, I was tracking down the Thai players at 6.30am. We need to get those pictures shot and sent – there’s deadlines to be met somewhere in the world.

Golf coverage is a fine balancing act. A mix of photographing past Open and Major champions and well-known foreign players. It may take 30 minutes, walking a hole or two to “tick” the box, getting a useable picture of a golfer. They only hit the ball around 70 times a round, a third of which are standard putting pictures. The photographers cover a fair few miles every day, although we have an inside corridor beside the ropes in front of the public we’re still trudging through the long and sometimes sodden grass. It would be a guess, but we must do upwards of eight miles per day usually carrying two or three cameras and lenses coupled with bending on one knee every time you stop to make a photograph. It’s hard on the body! Three days later my muscles are still sore but the pain of the blisters on my feet has eased. It’s a hard life but someone has to do it!

Friday saw some glorious weather, the sun shone and the sky was blue. There’s so many more possibilities when there’s “nice” light and shadows. Even wide angles lenses appear with filters! There’s more “art” to be made and not to forget the chimneys. Blue skies, silhouettes and fluffy clouds equals happy photographers. But we’ve all got one eye on the weather forecast. The rain was coming, “Saturday was going to be a shocker!”

But it was all making for a great tournament. Thomas Bjorn who so nearly won in 2003 was on the leaderboard along with some of the let’s say, “more experienced golfers” – Miguel Angel Jimenez, Tom Watson and Darren Clarke. But there was also an amateur in there too, England’s Tom Lewis. The writers would be busy!

The M & M’s, McIlroy and MacDowell had rolled off the board and were replaced with another Northern Irishman, Darren Clarke. “He’ll blow up”, was most people’s assessment. “Watch out for Kaymer or Mickelson”. But the rain came Saturday – mostly sideways. A struggle to keep the lenses and viewfinders dry. Chamois leathers working overtime. But at least it’ll sort out the leaderboard. A Monday playoff isn’t everybody’s cup of tea!

After the rain, he was still there Sunday. Clarke had a one shot lead and would be in the last group to tee off. Could he hang on? A lot of people were now tipping Fowler after his great round in the bad weather the day before. But at least we knew the winner should come from the last five groups. A plan was made and the three of us shared out the groups and headed onto the course. The trick is knowing when to stay with a group, most of our work was done between the 6th green and the 3rd tee. It was soon clear Mickelson was on a charge, but don’t rule out Dustin Johnson to sneak in too. Talking over our radios we tweaked our plan. Two of us were hovering around Clarke, he eagled the 7th, the crowd roared their approval. A small fist pump, a smile came through before gesturing to the crowd to hush ahead of Johnson’s putt. Golf etiquette at its best! The crowd were starting to believe.

Another downpour arrived but it didn’t effect Darren, he played on while I was sheltering beneath a spectators’ brolley. It’s not a good time to break a camera now. I continued with him until the 17th before making my way down the gated 18th hole. I needed to be there in advance to take a position to make sure everybody was in place. The plan was set. As soon as he makes his winning putt and lifting the claret jug, the messenger was running with our cards back to the editors. Time is ticking, the papers will be waiting for the pictures. Darren Clarke had won a major. Finally! 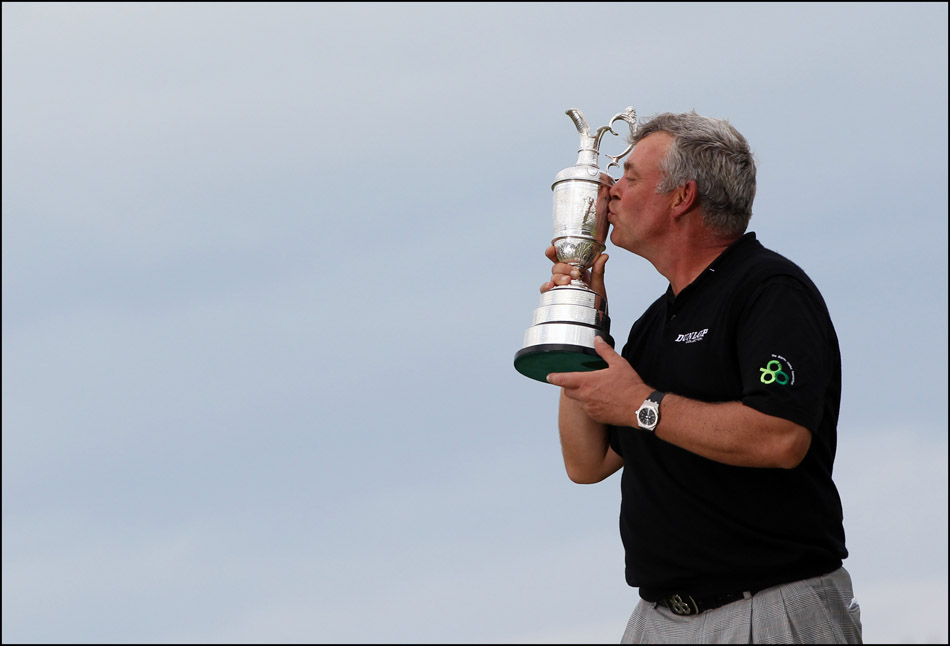